At level 90, you can accept the awakening quest from Saint Haven's Priestess of Darkness Mocha.

However, you must have already finished the 2nd Specialization to be able to take this quest. 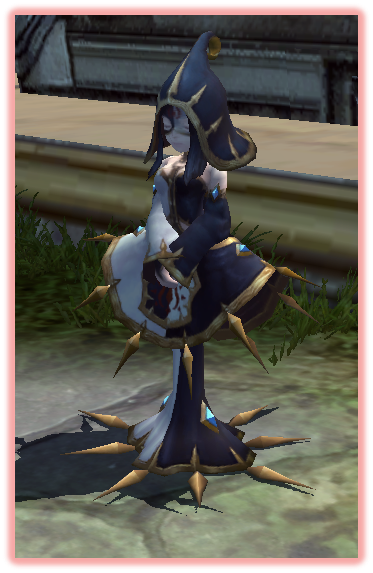 After completing the related quests, the "Awakening" skill tab will be accessible via the skill window [K], and you may proceed to add the new Awakening Skills. 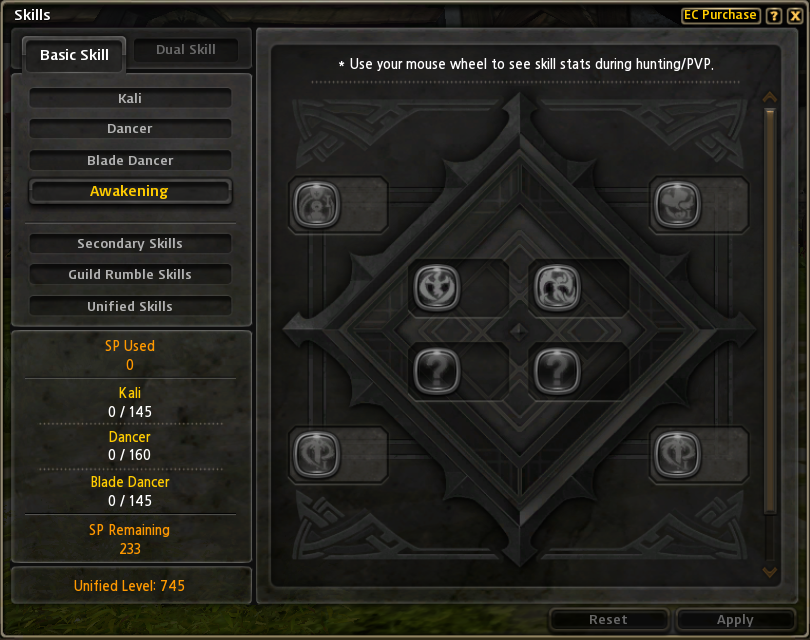 Completing the Awakening quest will also reward you with an Awakening Costume Coupon (7 Days). You'll be able to purchase Awakened Costumes for Kali 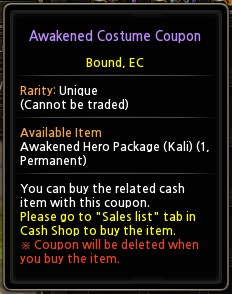 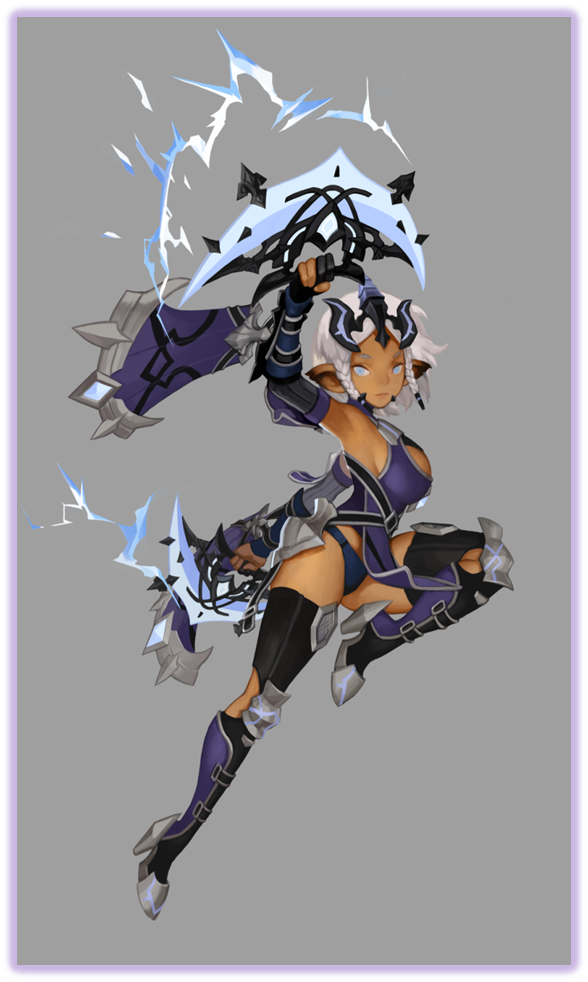 Summon Totem : Summons a totem in front to curse enemies constantly and enhance oneself

[Awakening Passive] Soul Devourer : When Ghost Gate and Begrudge are used, Soul is absorbed. When soul is full, own hp is recovered every 2 seconds

Grazing Rush : Throws Chakram in front to paralyze enemies and the character charges in front to deal damage

Blade Step : Uses Chakram to attack and deal powerful damage on nearby enemies

Acanthus : Acanthus is summoned to slash enemies and charges in front

The goal is to kill monsters to fill the Nightmare Gauge and attain Nightmare Stars.

Events occur at random when the Nightmare Gauge is 50% and 100% filled. Clearing these random events will award you with much more Nightmare Stars.

Upon defeating the boss at Nightmare Level 4, a reward chest will appear in the centre of the map.

You'll be able to attain items such as Level 93 Magic Talismans and Garnets from the Treasure Chest. 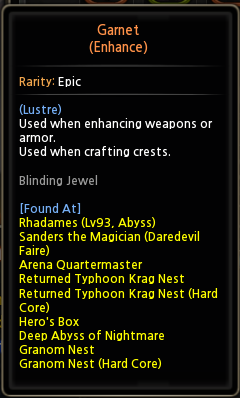 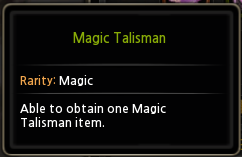 Genesis Earrings can now be crafted via the Blacksmith's Crafting Menu. 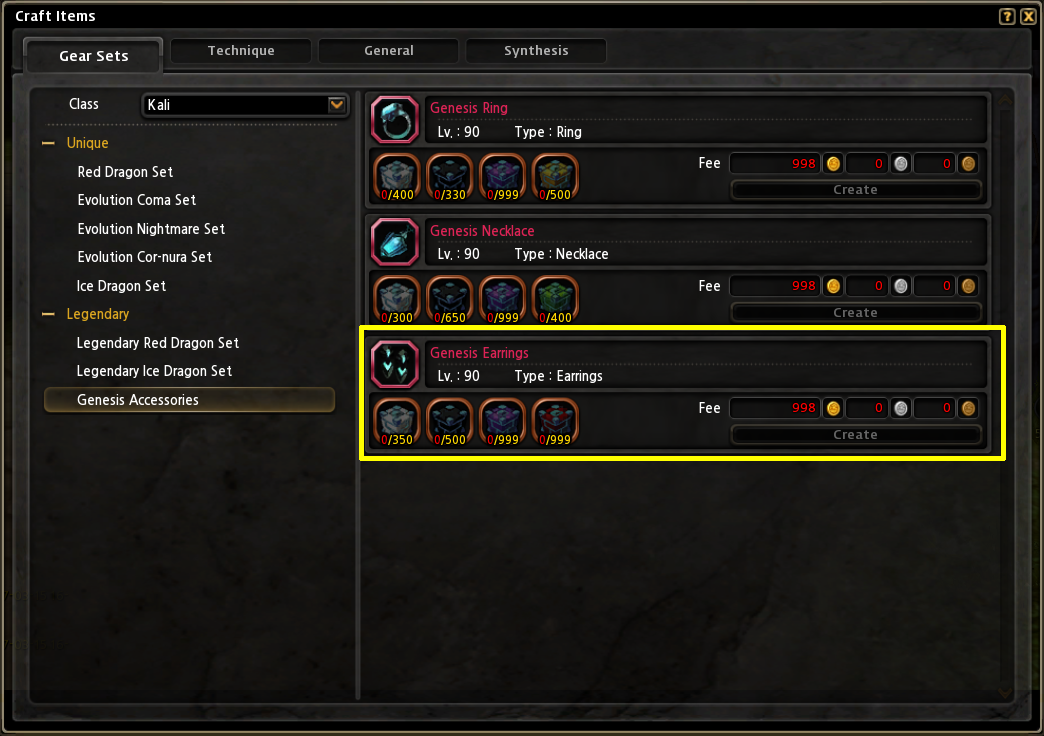 To craft Genesis Earrings, you will need Harmony Cubes.

Harmony Cubes can be obtained from Level 93 4-Player Hardcore Nests.

Restrictions on item purchase in Ladder Store is no longer based on Ladder Score, but on Rank Tiers now.

Rarestones can be obtained from Gold Pouches at a very low rate.

A feature that allows you to save your chats into a text file has been added.

[How to save chats]

You will see a "Save Chat" button.

The chat will be saved to the directory /Documents/Dragonnest/Chat 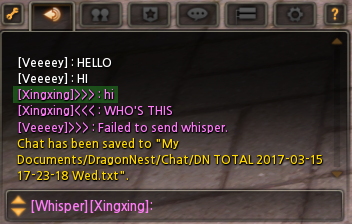 Damage values display has been simplified. 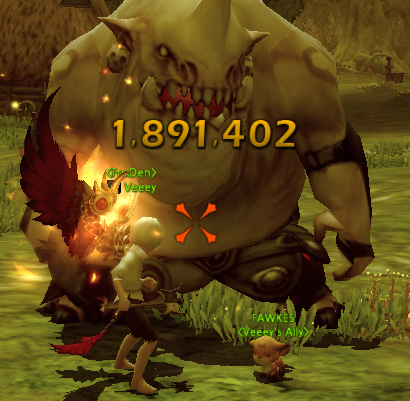 Comma is added for damage values with more than 4 digits

For values than 6 digits or more, the last 3 digits will be replaced with a "K".

This option can be turned on or off via the game settings, by checking the "Numeric Abbreviation" box. 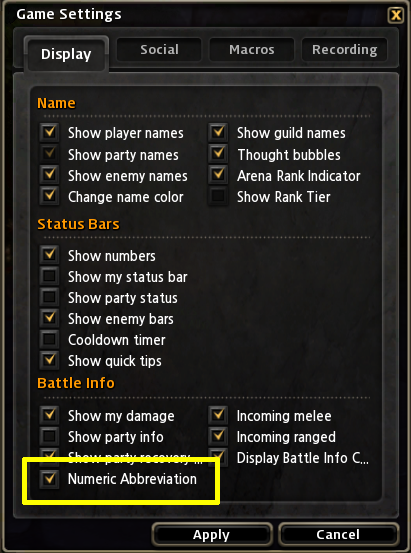 Finally, the total damage accumulated from combos will be shown in the screen once the combo is over.

Damages not counted towards combo such as burn and poisoning will not be included in the total damage.

Quest notification has been added for Specialization and Awakening when they are available so that players won’t miss them out.

If there is a Specialization/Awakening quest available, a notification will appear at the top of the quickslots upon entering town.

When the "Receive Quest" is selected, the quest will be attained immediately.

To help players better distinguish Specialization/Awakening quests, quest icons on minimaps and above quest NPCs will be changed 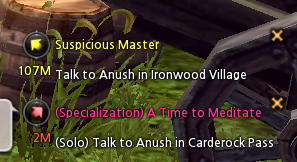 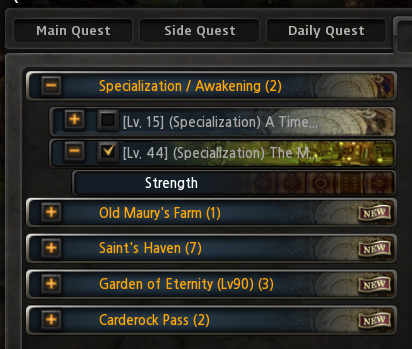 Guild missions have been added so players can now earn Guild Points when they win in [Colosseum mission room] and [Rank Battle]. 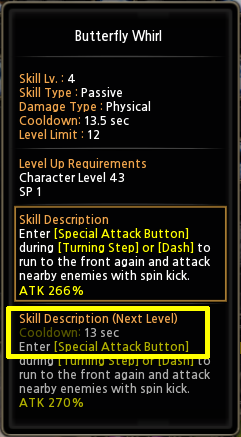 Returning and destroying Heraldries can now be done in the same way as other items.

[Craft Heraldry] and [Return Heraldry] have been removed from Heraldry Scholar NPC.

Right Click on the equipped heraldry to unequip it (fees apply)

Drag and drop heraldry outside the inventory window to discard it.

When you try to equip the same type of heraldry as one that is already equipped, it will be replaced with the new heraldry (fees apply).

- Effects have been added to Stage 2’s Vengeful Tombstone, Delusional Tombstone, Chaotic Tombstone, Infectious Tombstone so that they can be seen more easily even from afar.

- At Stage 4’s line pattern, ghosts that should be protected by the players will appear

- Effects have been added to Stage 2’s Vengeful Tombstone, Delusional Tombstone, Chaotic Tombstone, Infectious Tombstone so that they can be seen more easily even from afar.

- Damage will be lowered when players fail the line pattern in all stages of Hard Core.

- Ghost’s HP gauge has been changed to green.

- Damage received when ghost disintegrates has been lowered.

- The problem of nicknames not being shown has been fixed. 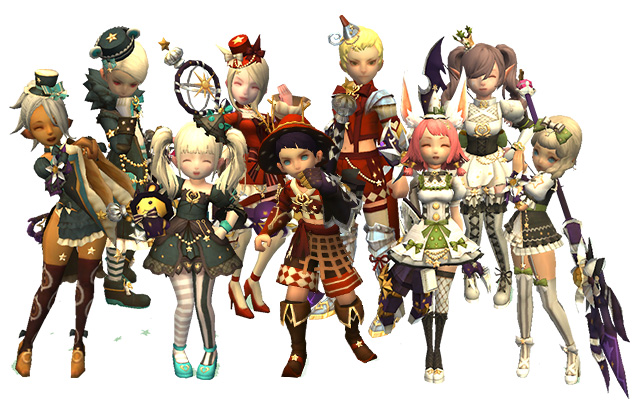 - Chance to obtain Brilliant Hero's Weapon Exchange Coupon and Fascinating Rajuul Spirit from this special Dragon Egg (Note that this is a different Dragon Egg from the Rajuul Dragon Egg release in the previous patch). 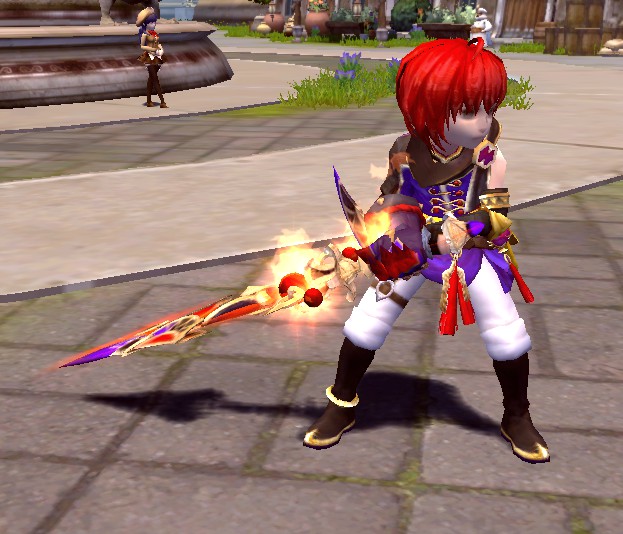 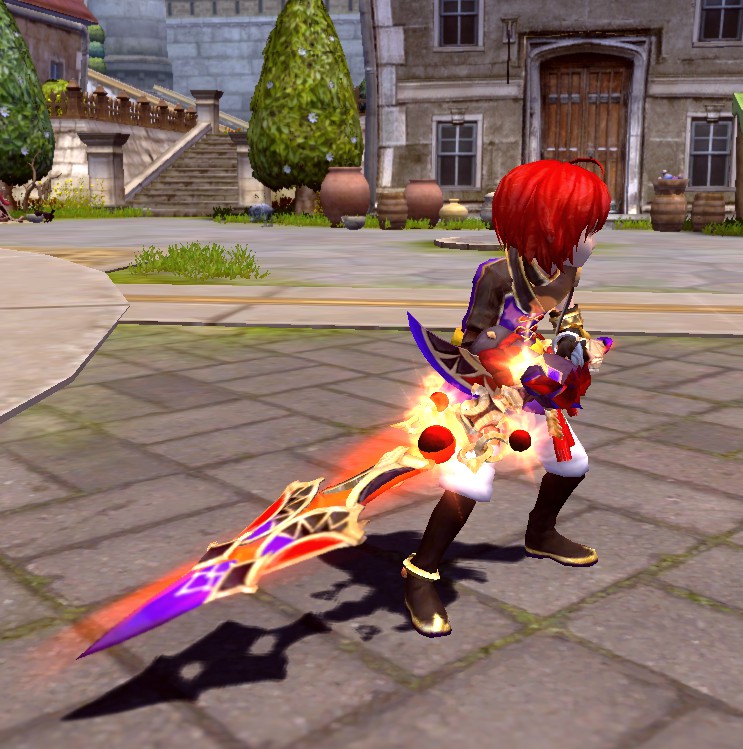 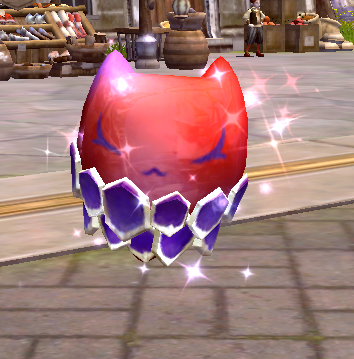 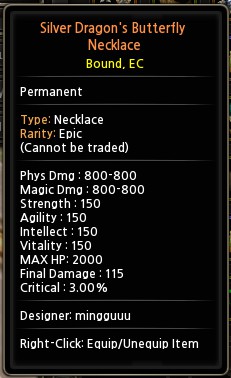 A new growth pet has been added to the cash shop. 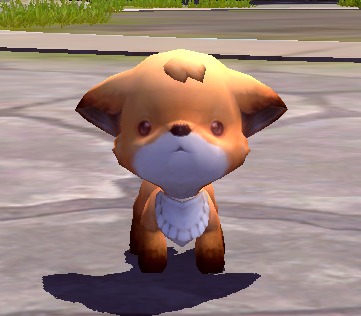 2 pet accessories has also been added for Foxy Fox

Phantom Guard (PVE, PVP): Phantom Guard is improved.
- MP is no longer deducted when Kali takes damage.
- Reduction in received damage is reduced from 26% to 20%.

Hands of Vengeance (PVE, PVP): Reduction in cooldown due to skill level is removed and cooldown will now be based on max level

Phantom Avenger (PVE, PVP): The issue of cooldown recovery effect being applied on [Phantom Avenger] has been fixed.
Invincibility effect has been removed and skill duration is increased.

Puppet Dance (PVE): Cooldown is reduced from 30 seconds to 15 seconds.

Class Mastery (PVE, PVP): Own Intellect stat increases when you learn this skill.

Specter of Torment EX (PVE): When specter’s curses are stacked, damage given to enemies is reduced from 300% to 150%.

Class Mastery II (PVE): Increase in own attack power is increased from 12% to 30%.

Windcall Twirl (PVE): Increase in Final Damage is reduced from 60% to 20%.

Illusion Dance (PVE): Increase in Final Damage is reduced from 60% to 20%.

Dance of Ecstasy (PVE, PVP): Maximum skill level is changed from Level 6 to Level 1.
Skill points required to learn this skill has been increased from 3 points to 10 points.
[Ghoul] and [Orc] spirits will not be summoned during the dance and [Dark Elf] and [Minotaur] spirits will be summoned instead.
ㄴ[Dark Elf]
- Additional damage occurs based on enemy’s HP while the spirit is active.
ㄴ [Minotaur]
- Own attack power increases while the spirit is active.

Class Mastery (PVE, PVP): [Second Turn] related effects are changed.
- Skills that create [Second Turn] will be changed to [Chakram Flurry] and [Whirligig].
- When you earn 10 points of [Second Turn], cooldown of [Blade Dance] type of skills will be recovered immediately and action speed will increase for 5 seconds.
Own Strength stat increases when you learn this skill.

Class Mastery (PVE, PVP): The skill that creates [Second Turn] is changed to [Dusk Hunter].
Own Strength stat increases when you learn this skill.

[Awakening Passive] Forward Thrust (PVE, PVP):  Basic skill action has been changed to be the same as Forward Thrust EX.
When the skill is used or while retreating, enter [Back direction key] and it will be changed to attacking on the spot.

Fury of the Owl (PVE): Previous effect is removed and own and party members’ critical damage increases by 10% for 300 seconds.

Fury of the Owl (PVP): Previous effect is removed and own and party members’ critical damage increases by 5% for 300 seconds.

Wisdom of the Owl (PVE): Cooldown is reduced from 120 seconds to 90 seconds.

Wisdom of the Owl (PVP): Cooldown is increased from 60 seconds to 120 seconds.

Iron Will (PVP): Super Armour defence power will no longer increase when the skill is used.

Elemental Aura (PVP): Increase in Light attribute attack power is changed from 20% to 10%.

Stance of Faith EX (PVP): Cooldown is increased from 7 seconds to 15 seconds.

Blessing of Strikes (PVP): Increase in Physical and Magic ATK is changed from 27% to 14%.

Inquisition (PVE): Developer’s comment-
※ A fatal structural issue has been found on Inquisitor’s 'Inquisition’ skill so it has been changed back to how it was before renewal.
The decrease in attack power with this change has been compensated in other main skills and we are examining whether further improvements can be done on this skill.

When electrocuted targets are hit with Light attribute attack, electrocution effect spreads to enemies within the area at a certain rate and causes additional damage.

Inquisition (PVP): Previous effects are removed and when electrocuted targets are hit with Light attribute attack, electrocution effect spreads to enemies within the area at a certain rate and causes additional damage.

Gravity Grenade (PVP): Cooldown is increased from 14 seconds to 24 seconds.

Gigaton Quack (PVE): Cooldown is reduced from 26 seconds to 24 seconds.