2. Changes to Penalty for Equipping Equipment

6. Other Shop Changes and Point Removals

Hello, this is Developer G, the person in charge of primary stat effect improvements.

Below I will discuss the intention behind the many changes we made to improve the influence of primary stats and the current situation regarding tweaks in the aftermath of said changes.

- Our intention in doing so was to have a greater variety of characters with characteristics determined by the principle stat of their class.

- Contrary to this intention, the CRT stat became a much less valuable stat due to its universality across all classes.

- Classes whose main stat was PWR or INT could easily improve CRT and then upgrade CRT damage simply by increasing their primary stat.

- Agility classes were able to reach maximum CRT with little effort by upgrading their primary stat, but were forced to use a lot of cash and equipment slots to improve CRT damage.

- As a result, it was much more costly for Agility classes to improve CRT damage than PWR/INT classes. This led to an imbalance and forced this class to rely almost completely on skill use.

- This method was able to address class imbalances in the short term, but it was inevitable that it would have a sustained deleterious effect on game settings in the long term.

- This patch will make it so Agility characters can improve CRT damage by increasing their primary stat, just like PWR/INT characters, ensuring that all characters can get better through stat upgrades in an equal fashion.

- Removal of the ability to increase the CRT stat for all Agility classes considerably decreased their critical hit rate. In response, we made it so Hero Level increases could be used as a supplement to address this disadvantage.

- Reaching Hero Level 500 will increase CRT by 220,000 and this ensures such classes will achieve critical hit rates equal to before these improvements were made.

- Due to current issues related PVP and updated content, we put off the removal of supplemental stats enhanced through primary state increases.

- The supplemental stats per primary stat are as follows:

- We expect to remove these stats soon, and in doing so will make it so that all primary stats will lead to equal benefits (limited to main class). (attack power, CRT damage up)

We regret that the Red Lotus Palace patch will lead to significant changes in the game.

These improvements will ensure that all classes start on an equal footing in terms of item settings, and this will lead to a more finely-tuned balance between characters.

- The influence of primary [PWR, Agility, INT] stats has been revised.

-Rather than increasing [CRT], classes with agility as their primary stat will see [CRT damage] increase instead.

- The following shows the increase value per class, per primary stat upgrade.

2-2. Changes to Penalty for Equipping Equipment

*The existing penalty for equipping equipment was reduced in order to prevent the overall devaluation of said equipment as a result of such excessive penalties.

Hello! Hello, this is Developer G, the person in charge of primary stat improvements and Hero Level expansion.

Below I will detail our reasoning for Hero Level expansion as well as the detailed changes involved in this process.

- The changes made in this instance were made to ensure accumulated play time after users reach the maximum Hero Level.

- In addition, we have minimized the amount stats increase with each level up to prevent a gap in ability between players due to Hero Level differences.

- This improvement is meant as a yardstick for growth beyond accumulated play time.

- Improvements were made regarding improvement intervals for each stat type and increase amounts to ensure players get a more acute sense of improved character strength as Hero Levels increase.

- The details are as follows:

A. ATK increases by a set amount of 100 with each level up.

C. At LV 101, Final Damage increased by 200. Increases will be incremental per level up afterward (changed from increase by 10 every 100 levels).

- These improvements were made to ensure all players will feel their character growing stronger as they level up within each Hero Level interval.

(3) Improvements to Speed of Growth

- With the expansion of Hero Levels, players can now reach LV 1000, which was once the maximum level, much more quickly.

- We have expanded the maximum acquirable Hero EXP from 3,000,000 to 45,000,000 and have also increased the amount of Hero EXP obtained for clearing stages and Nests.

- In addition, players can acquire a great deal of Hero EXP from the Fragmented Labyrinth, which has been set as content that can be played once a week. (Please refer to the [Labyrinth Conquest] Fragmented Labyrinth Weekly Clear Reward breakdown within the patch notes for more details.)

- We have also added appropriate hurdles for progressing from levels 1000-1500, and made leveling up from 1501 onward an achievement for hardcore players.

We hope these achievements make Hero Levels a more attractive element of the game.

-Additions/changes made to the stats increased through Hero Levels.

- Changes were made to the amount of Hero EXP acquired for clearing Nests and stages. 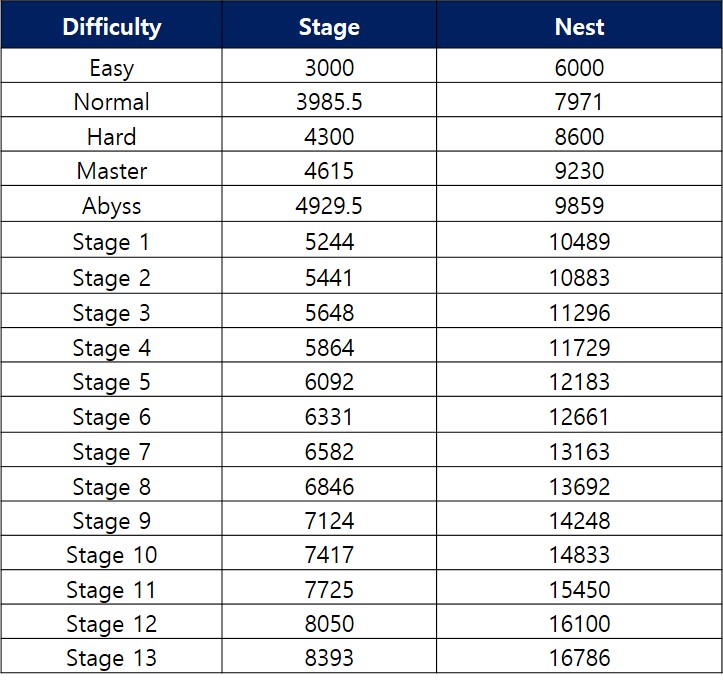 - When a stage Mission pops up, there is about a 10% chance of another Mission with additional rewards also appearing.

- For additional reward stage Missions, enhance material boxes and more than 500 Gold have been added as acquirable basic rewards.

- When Nest Missions pop up, there is about a 10% chance of another Mission with additional rewards also appearing.

- For additional reward Nest Missions, Dragon Jade crafting materials and more than 1000 Gold have been added as acquirable basic rewards.

- There is a small chance of a co-op/alliance Mission appearing that will allow all party members to get rewards.

- When just one party member undertakes a co-op or alliance Mission, all party members can get a Co-op Reward Box as a drop reward.

- For more details, please refer to the [Mission Board Trial Closure] patch note. 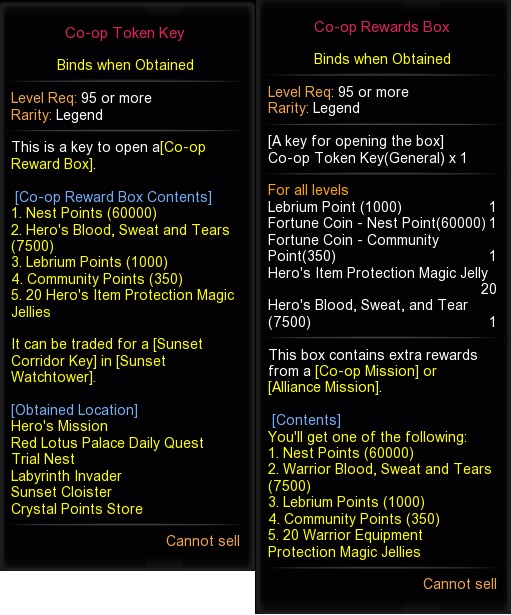 1. Items with a higher acquisition rate as difficulty increases

- Lapis: Lapis will be dropped after Labyrinth stage 1 and the drop rate will be increased commensurate to the difficulty level.

2. Items with a fixed acquisition rate regardless of difficulty

- Now Sunset Corridor Map Pieces can only be acquired from the Labyrinth Invader.

- There is now a small chance Labyrinth Invaders will drop a Sunset Key, and an even smaller chance of dropping normal Ancient Equipment (Spirit's Battlegear, etc.).

1. Items with a higher acquisition rate as difficulty increases

- Lapis: Lapis will be dropped after Labyrinth stage 1 and the drop rate will be increased commensurate to the difficulty level.

- Fragmentation Crystals: Different types of Fragmentation Shards used for crafting Labyrinth Relic will be dropped in their related Nests and the drop rate increases as does difficulty.

2. Items with a fixed acquisition rate regardless of difficulty

- Labyrinth Accessories: Dropped for defeating a boss on any difficulty. The better the grade of accessory, the lower the drop rate.

- Three (3) Trial Nest Entrance Tickets can be purchased per account for each Nest type.

- One (1) reward can be obtained per character from the Trial Nest.

- The Fission Maze can be challenged at any time, without entry restrictions.

- No rewards will be acquired instantly for clearing one (1) time.

- A reward based on the highest difficulty cleared each week will be distributed every Saturday at 9 AM.

- The amount of rewards also increases the higher the difficulty level of the final clear.

- An Explosive Goblin Technician has appeared.

- Provides luck if one of your companions is engaged in solo matching.

- [EVENT] The weekly limit for clearing the Storm of Time and Space has been reduced from 10 to 7.

- [EVENT] The maximum amount of Premium Garnet acquired from Golden Chests after clearing Storm of Time and Space has been reduced from 50 to 30.

- The follow items can be acquired in reward boxes after the Red Lotus Palace patch. 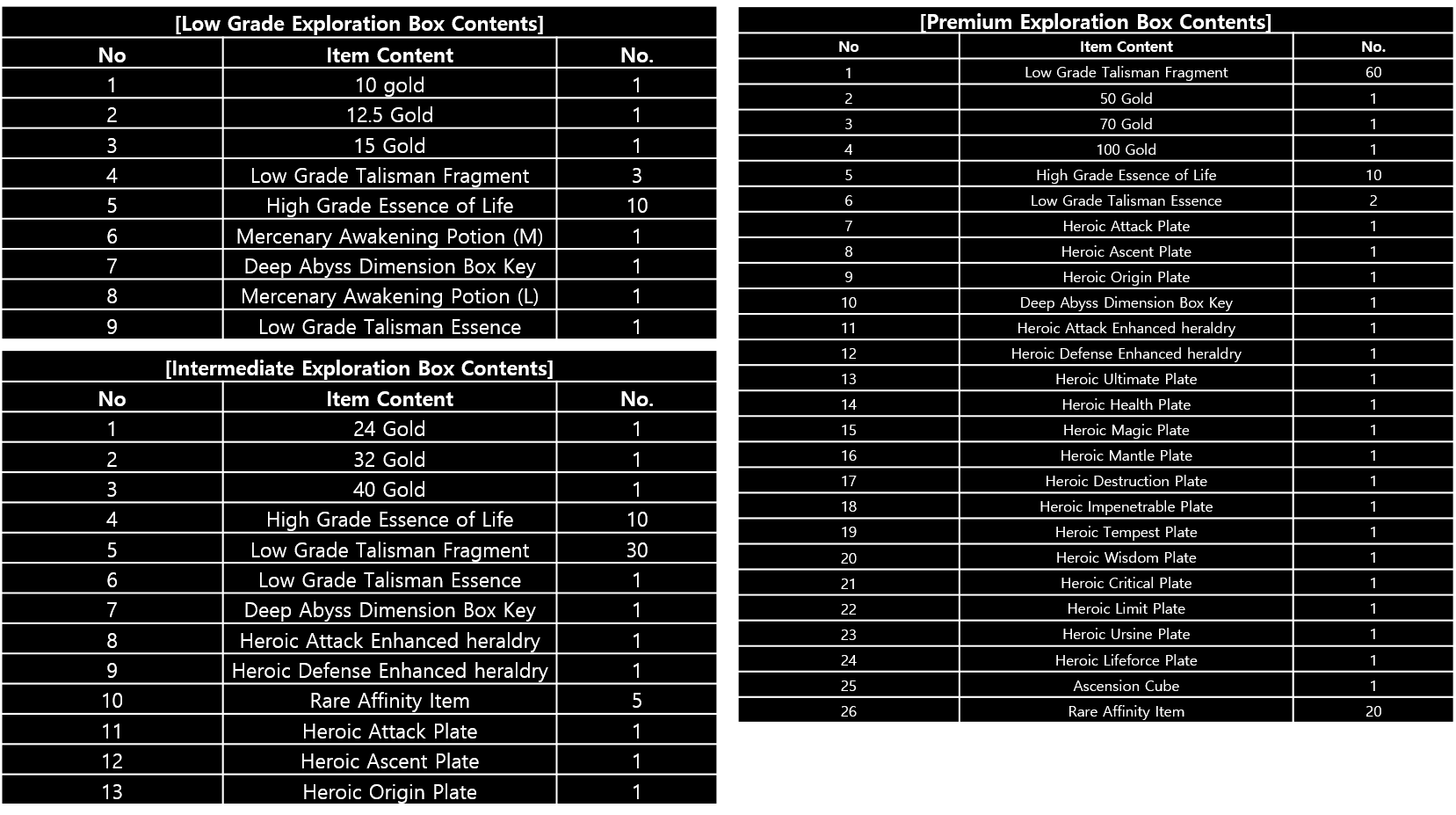 1. Importance of the Mission Board

- The amount of rewards acquired from the Mission Board have been greatly increased. We recommend regularly challenging the stages or Nests pertaining to Missions to get the best reward possible.

- We have made farming unique for each content type and reward. We recommend tailoring your game play to address areas where you are currently lacking. 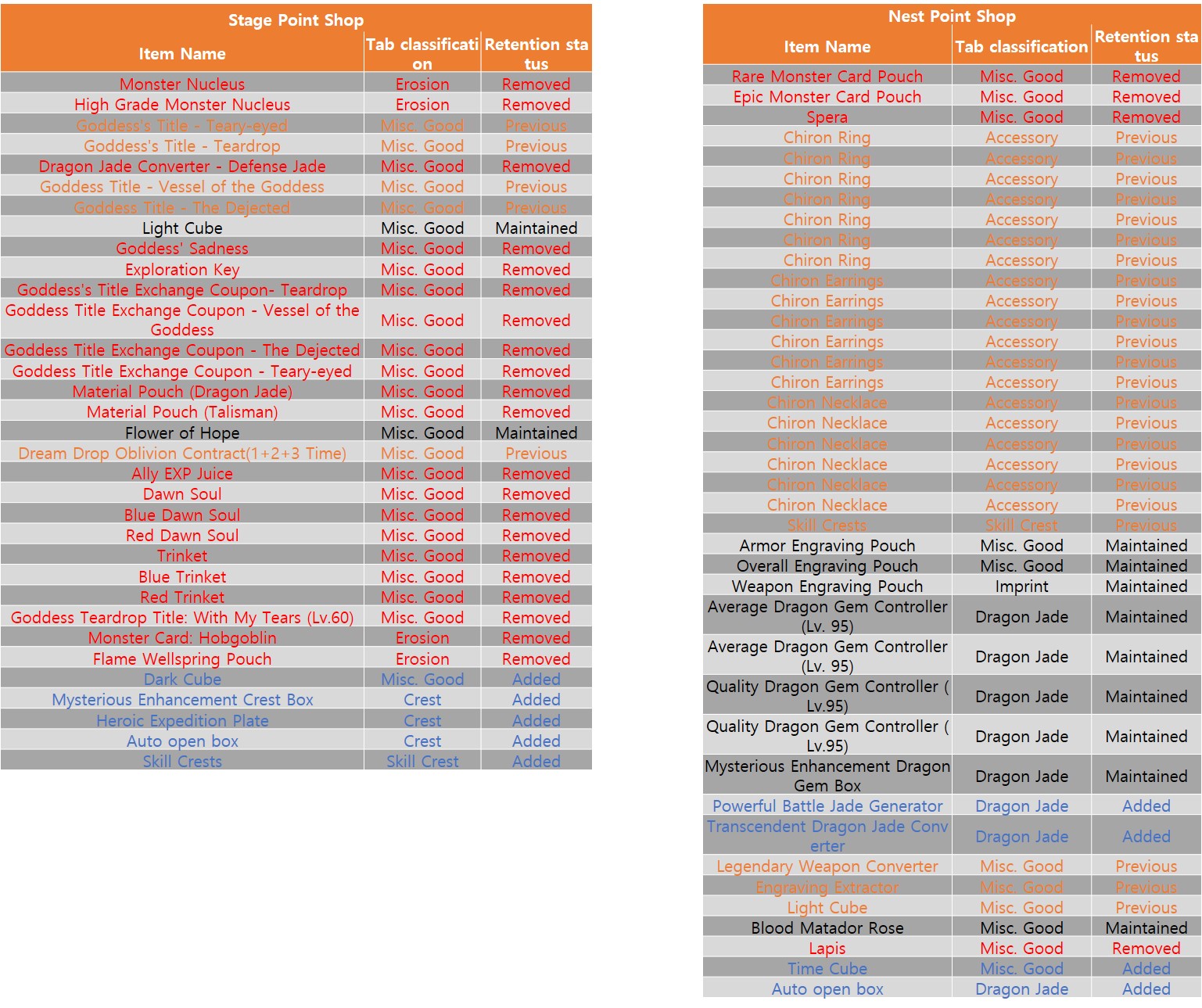 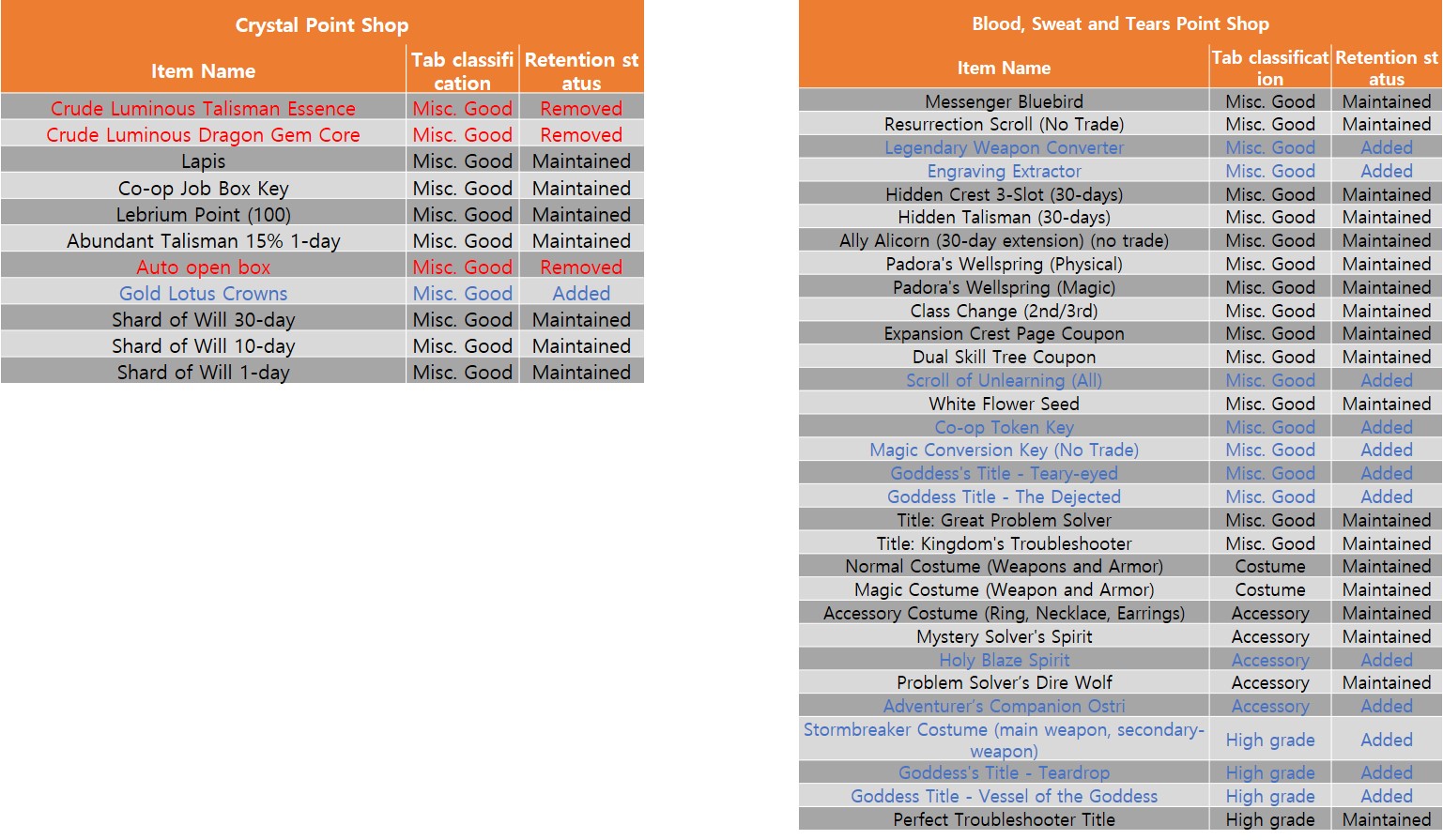 2-6. Other Shop Changes and Point Removals

- The Sealed Box Shop managed by Loffy is now closed. Thanks for shopping.

-The items sold in Galsperia are now purchased with Stage Points instead of Lapis.

A Storm Balalaika weapon has appeared at the Mission Board Shop.

-This is a costume item for appearance changes only. 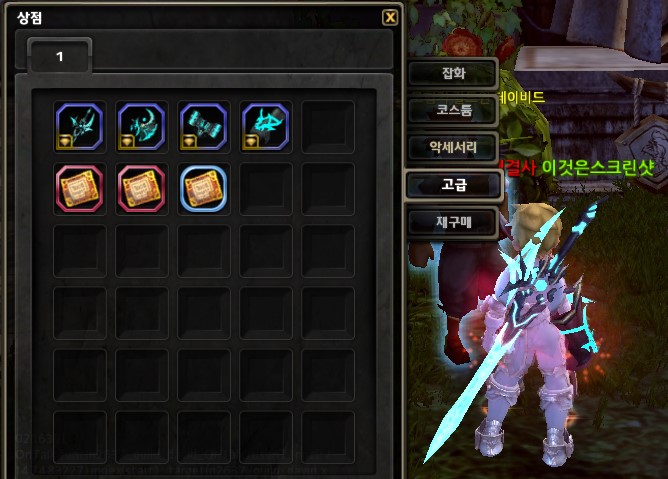 World Daily/Weekly Tasks shared by players were added to the server.

The World Daily/Weekly Tasks can be carried out upon reaching character LV 95.

※ To carry out a [A Collector's Request], a cyclical specialty quest will begin after getting the [Goldfish Merchant Guild] quest from [Head Merchant Jamihwa].

Cyclical quests allow you to collect Blue Wooden Cards to complete the [VIP of the Merchant's Guild] quest. You can then begin [A Collector's Request]. 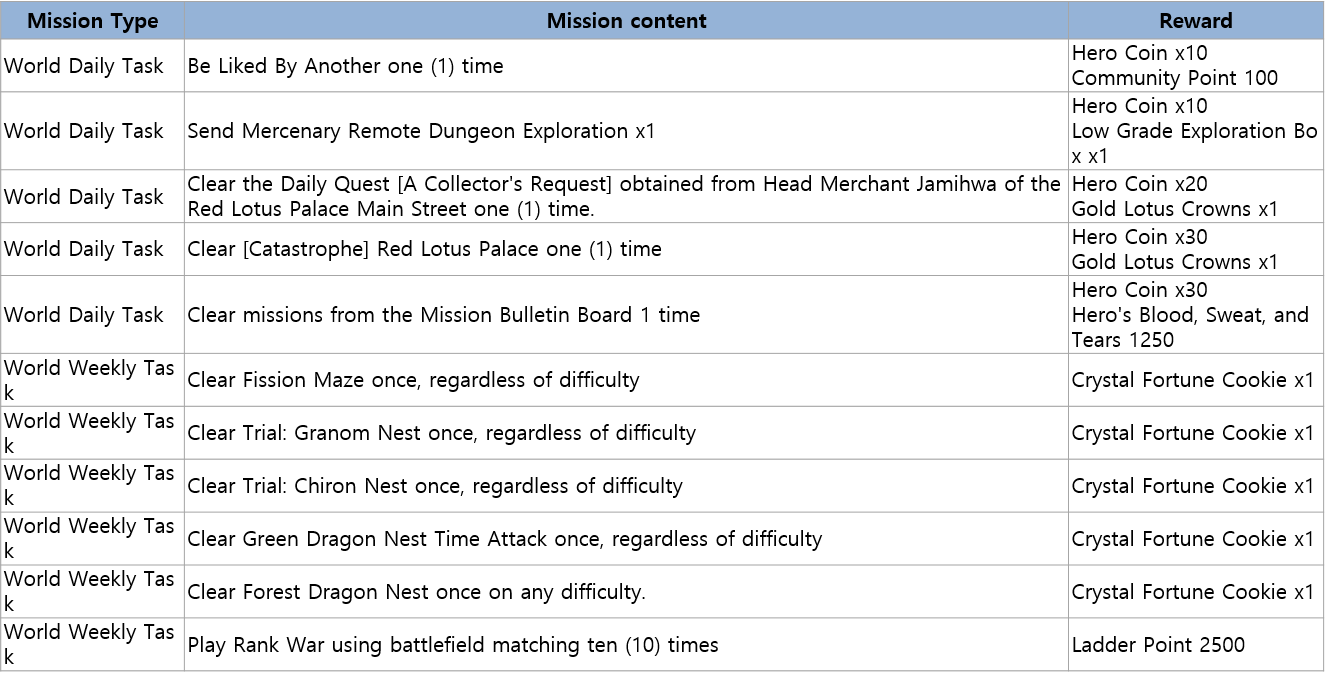 Changes made so fatigue (FTG) can now be accumulated daily.

The amount provided daily is 3600, and this will accrue even if players do not log in, through the maximum FTG limit cannot be surpassed.

This FTG restructuring will see the average fatigue accrued per day from Daily/Like/Task Reward/Weekly FTG increased slightly from the above 3578 to 3600.

- Skila equipment enhancement is now available up to +20.

- [Enhance value reductions] no longer occur as a result of failed attempts to enhance Skila Equipment from +0 to +8 (8->9) as long as the required jelly is used.

- Reflecting this removal of enhance value reductions until +9, we have increased the amount of Lebrium Points consumed for enhancing this Skila Equipment from +2 to +9. Overall enhancement costs are the same as before, but most players will be able to enhance up to +9 for roughly the same average cost, without any of the previously existing huge cost discrepancies.

- There is a certain chance the equipment will be destroyed when attempting to enhance without the full amount of jelly required. 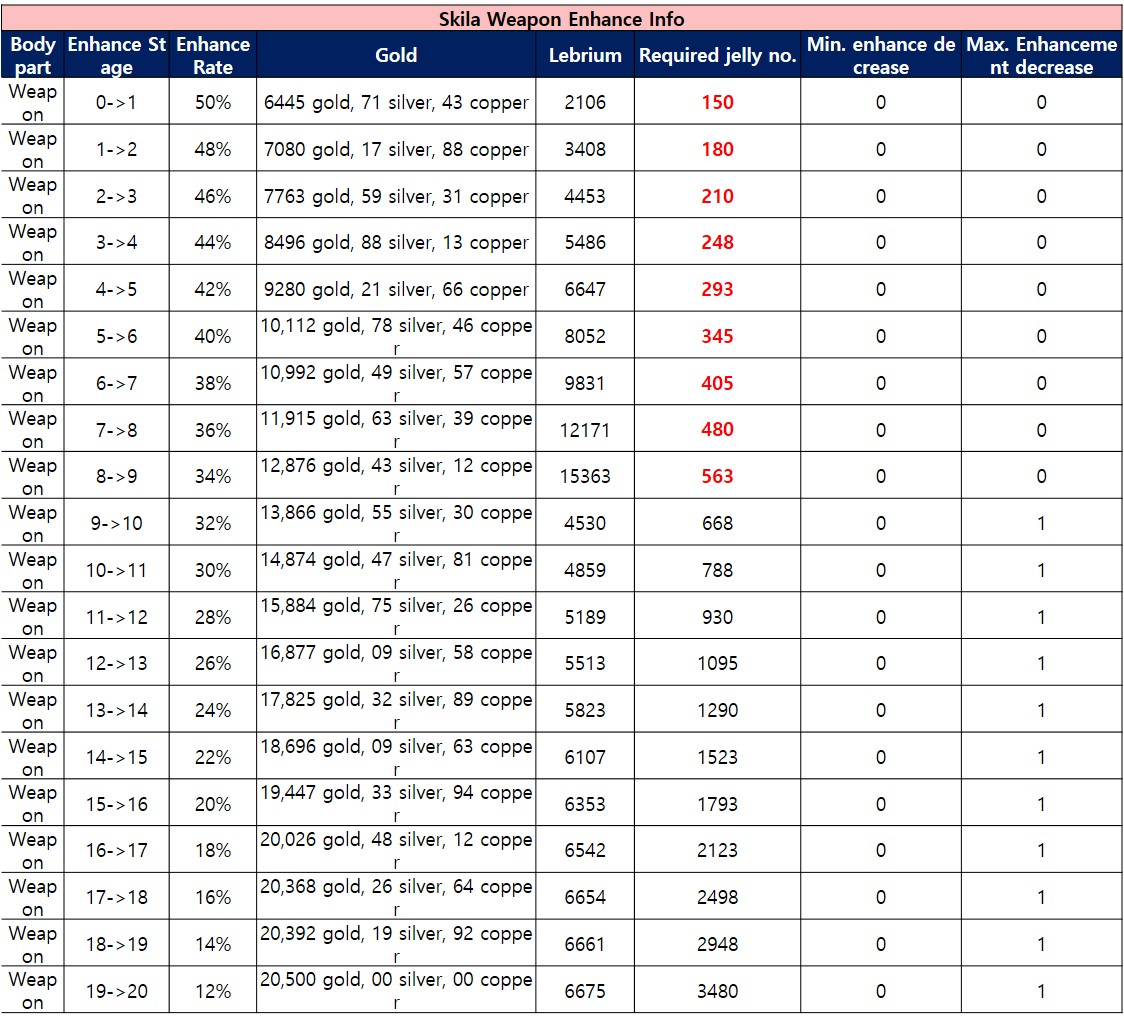 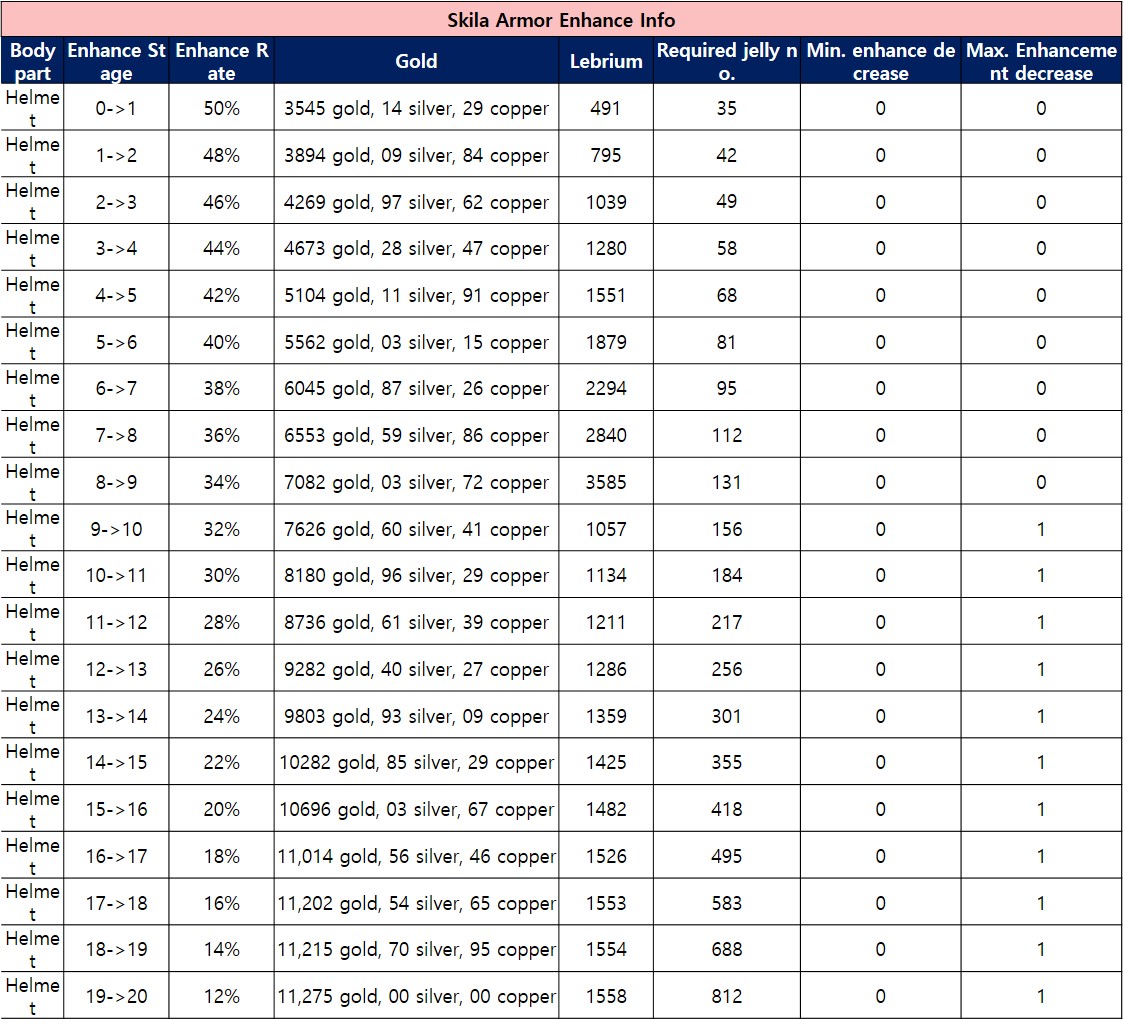 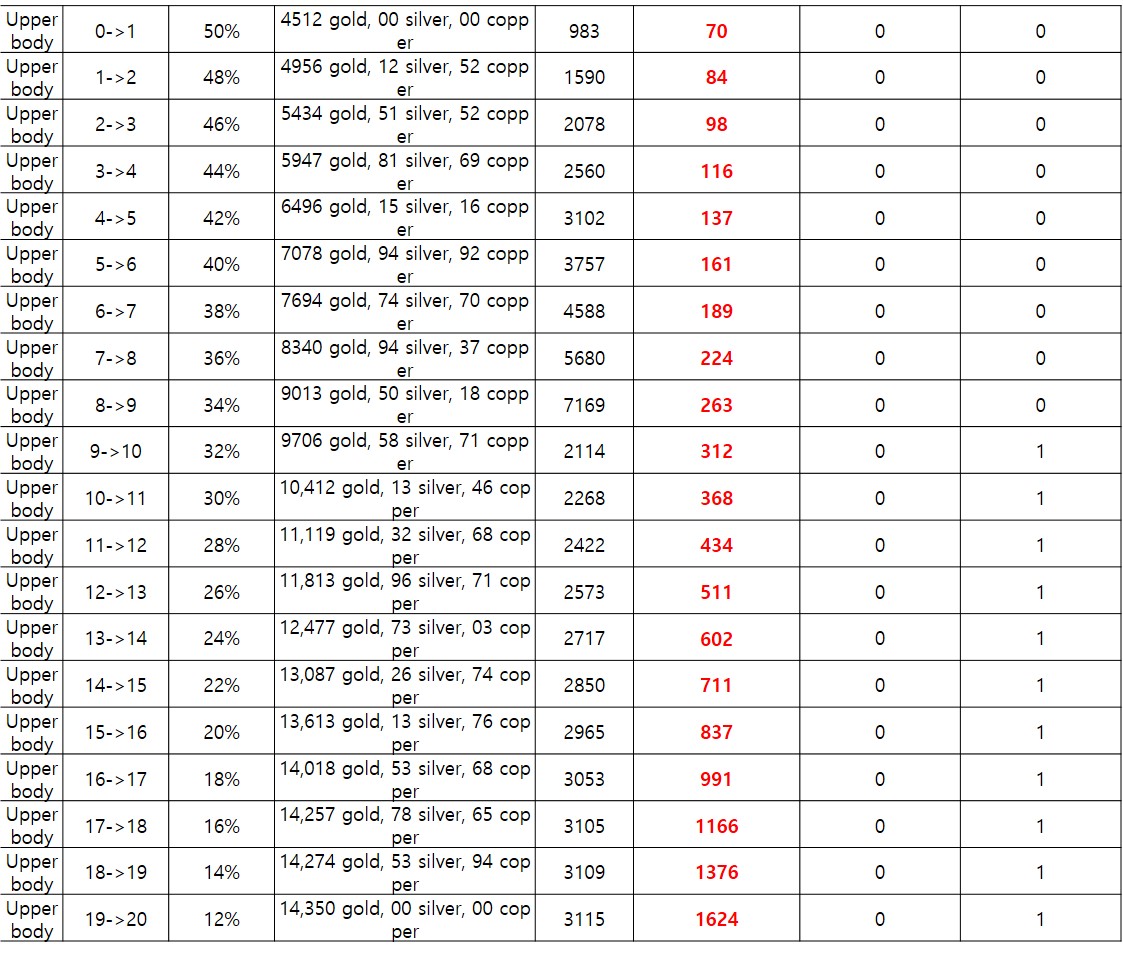 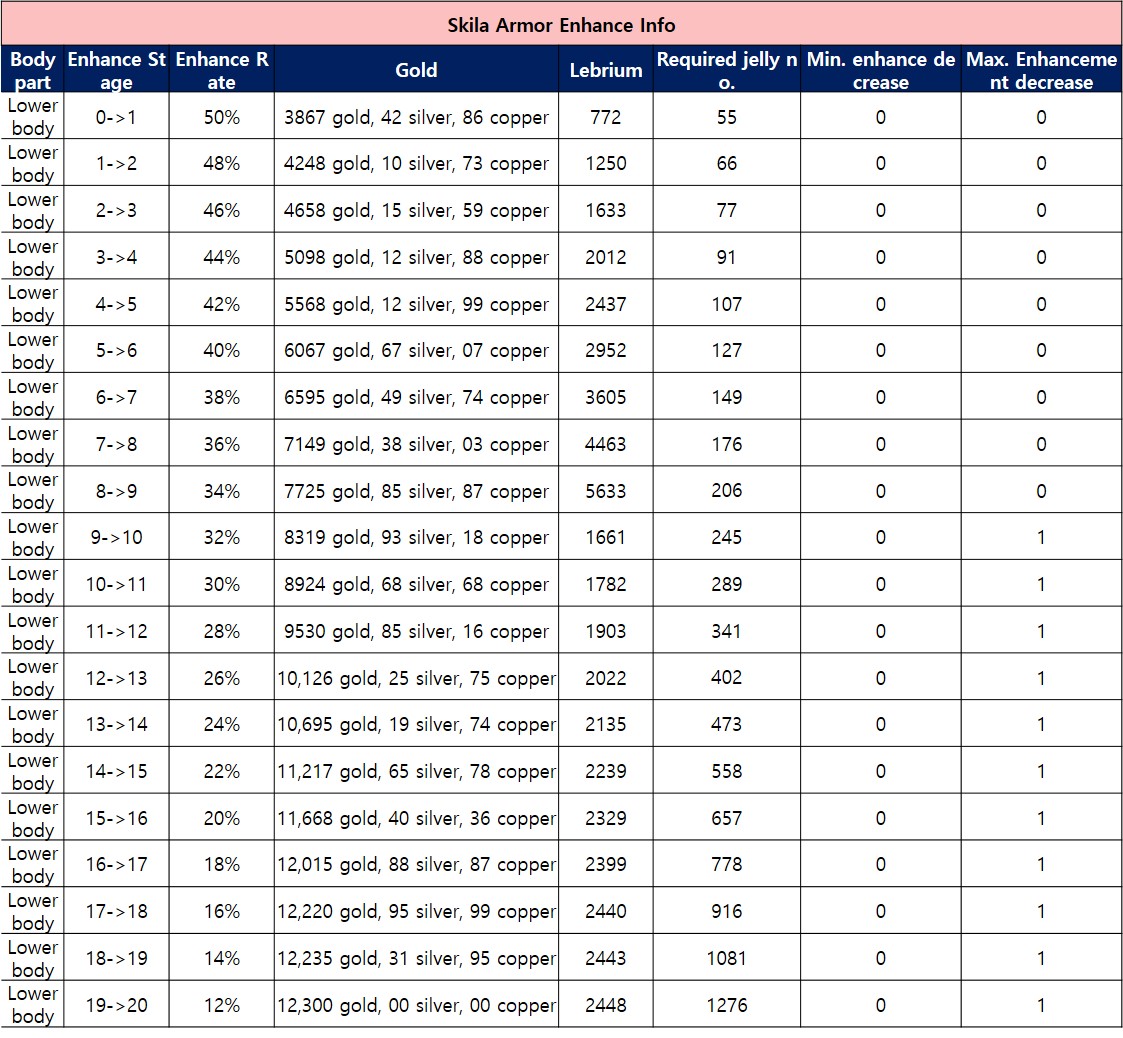 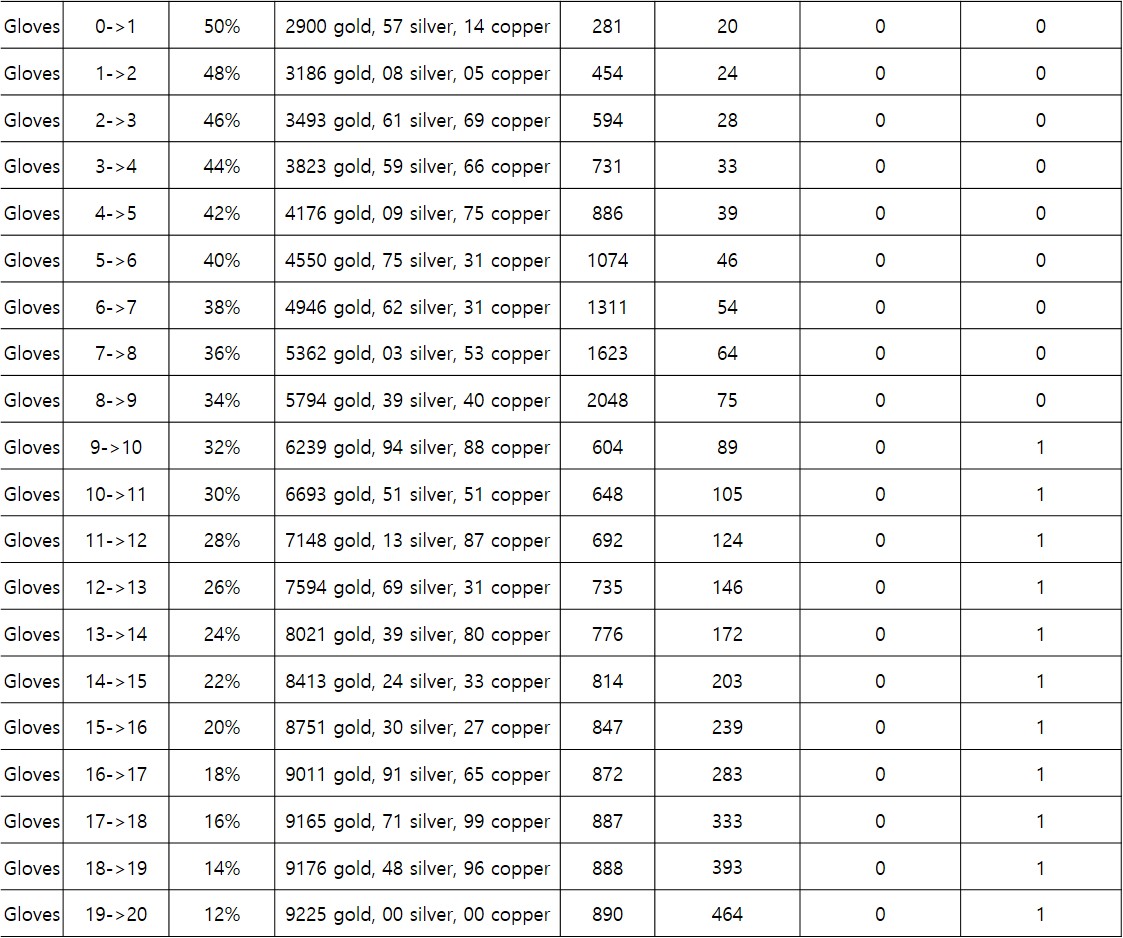 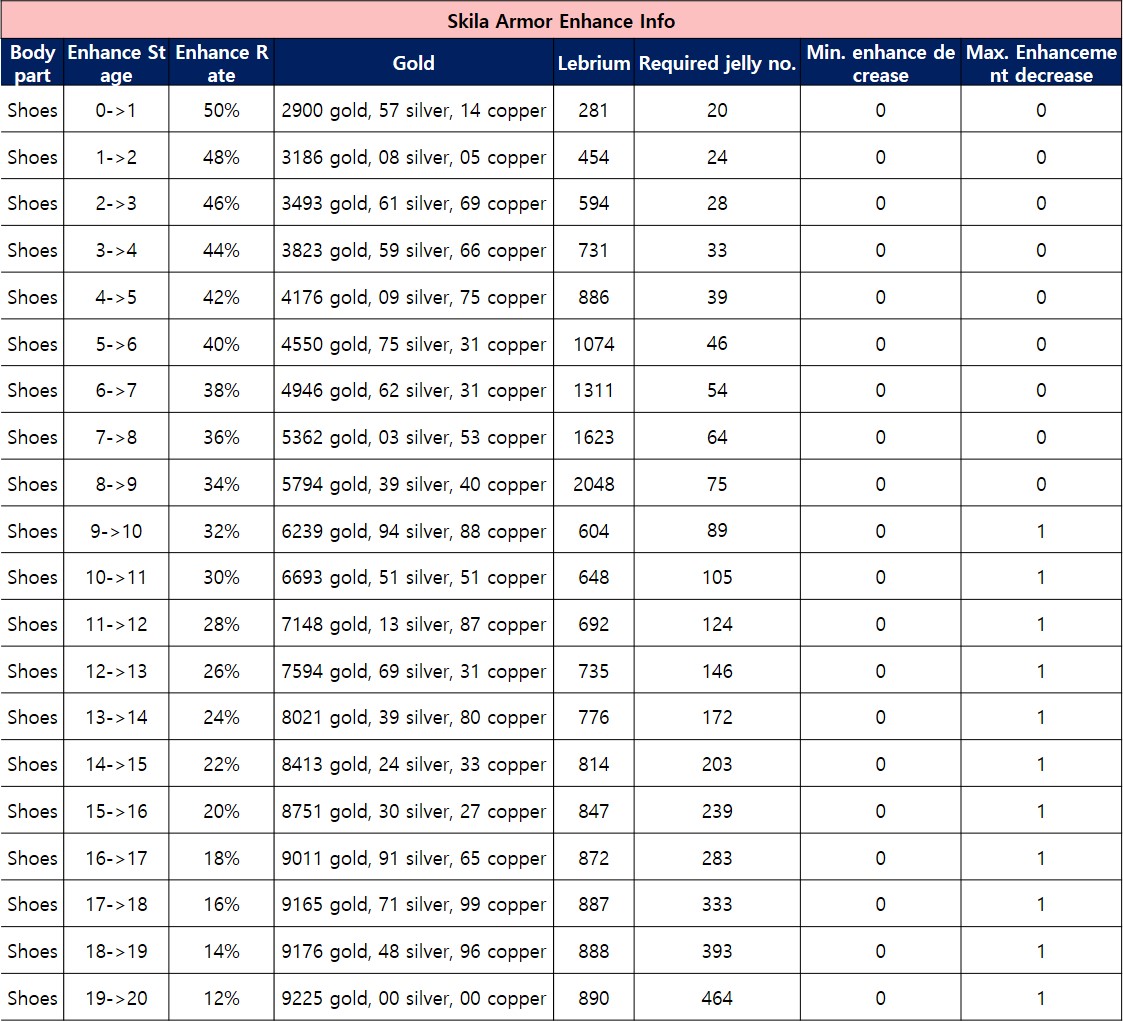 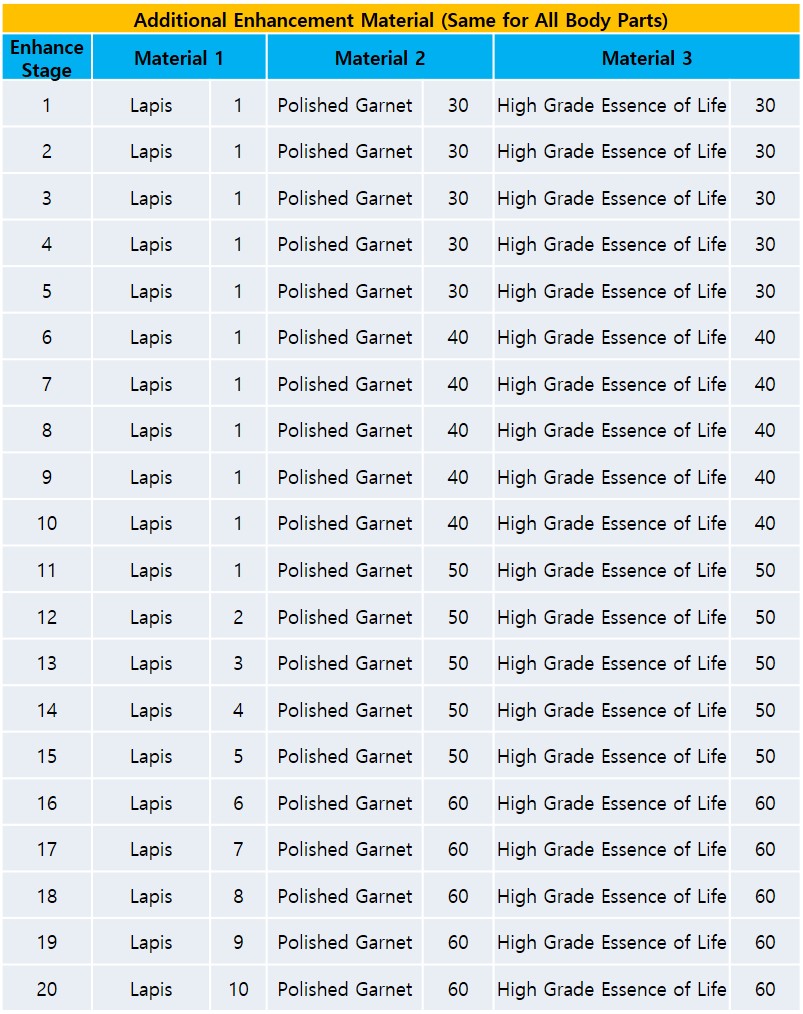 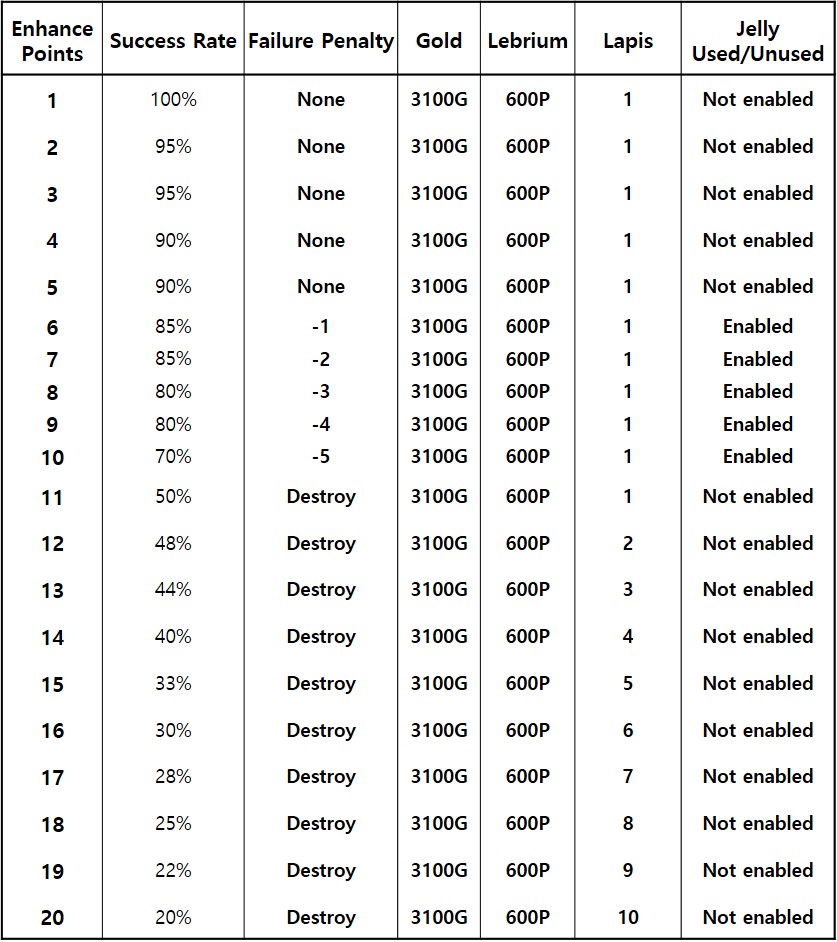 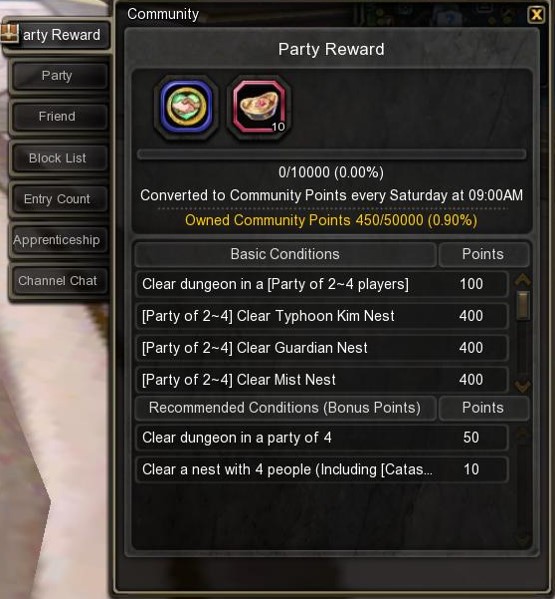 - It appears lower-ranking players have felt the burden of excessive repair costs.

For this reason we reduced the repair costs for the tiers Neiys 1 - Calypse 3.

- With this Red Lotus Palace update the points and materials acquired in Nests can be used for Dragon Jade growth.

The Purified Labyrinth Relic that can be crafted using crystals acquired in Nests was also changed into items that are related to Dragon Jade growth.

- Changes were made to the Mysterious Enhanced Crest Box. (Existing boxes do not drop Battle [Hero] Heraldry).

- Since the Red Lotus Palace patch, there is a small chance of acquiring them when opening Battle Enhanced Heraldrys.

- Upon clearing Hardcore mode, the value of [Hero EXP Potions] acquired from selectable Golden Chests has been changed to [1,000,000].

- Dungeon entry has been streamlined, and the usage area for items that have lost value or can no longer be acquired has been removed. 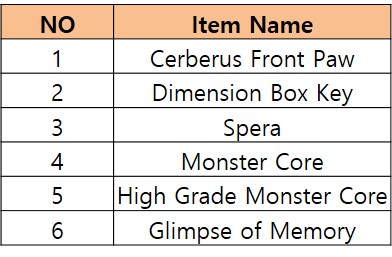 - With this Red Lotus Palace update, the acquisition area has been changed for many items. Please refer to the information below to determine where a desired item can be acquired. 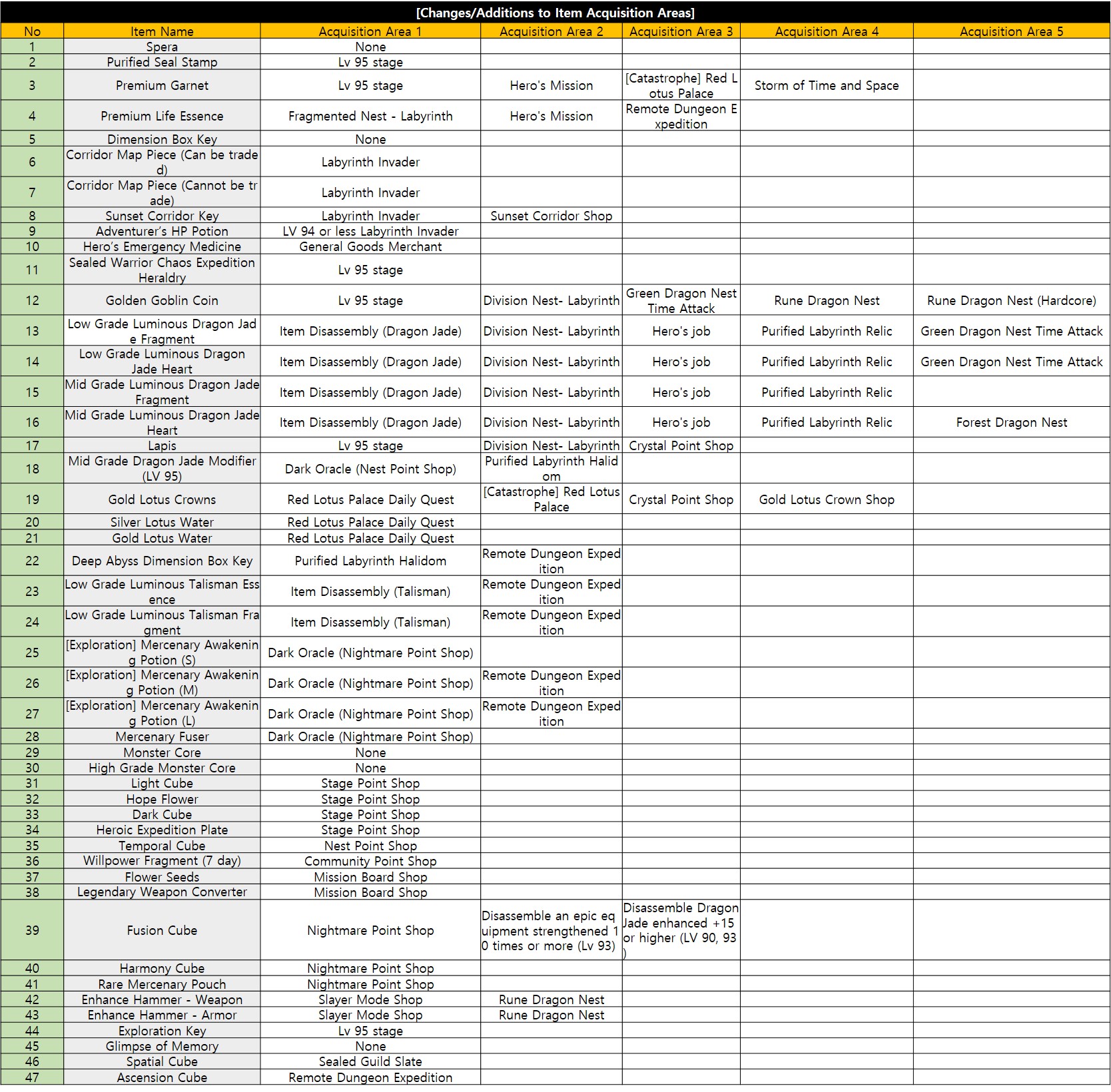 * Partial changes made to the contents and acquisition rate of Gosuk’s Precious Box. 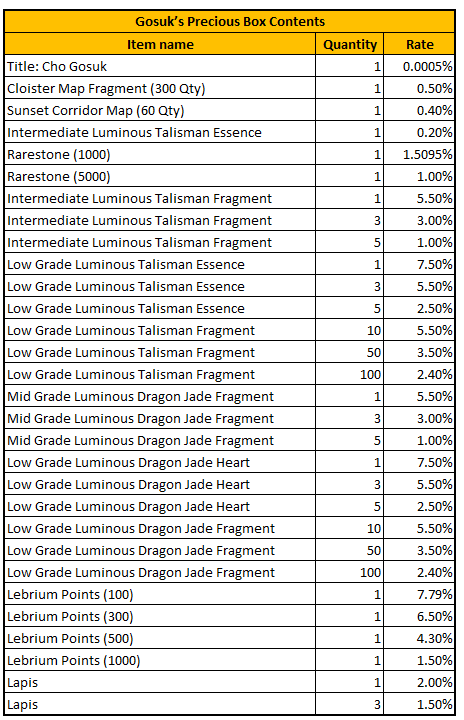 - The Deep Twilight Box (class-specific) from Gosuk’s Precious Box provides an armor or accessory item specific to the character's class. A Sunset Cloister Key is required to open it.

- You can obtain a LV 95 Rare grade Warrior Enhanced Talisman from the Sealed Warrior Talisman obtained from Gosuk’s Precious Box.