※ A new type of mission has been added to the Mission Bulletin Board to boost mission variety.

※ The new missions added to this update will not appear upon refreshing the list after being deleted.

※ The Frontal Breakthrough Heraldry Attribute ATK value will be 2% - 20%.

※ The additional Frontal Breakthrough Heraldry stat will not be influenced by the Attribute ATK value.

※ Vigor Heraldry possesses a 20% Attribute ATK stat value and can be equipped along with Fierce Battle Heraldry and Frontal Breakthrough Heraldry.

※ Vigor Heraldry does not have any additional stats. 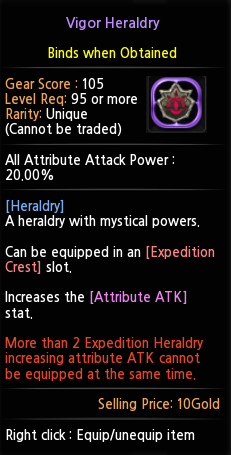 ※ Several Companion Mission Boxes can be owned at once.

The Exhibition Tournament was designed so that all guild members could enjoy prestigious rewards through the performance of the most powerful warriors representing their guild.

However, it has been deemed problematic to have a structure allowing players to enjoy rewards simply by signing up for a high-ranking guild

Therefore, Exhibition Tournament rewards have been adjusted so that they can only be acquired by guild members

who have contributed more than a certain amount to the guild during the tournament season.

Even when the Exhibition Tournament is not opened, you can earn season contributions through guild donations during the season.

The reward period is the same as before.

Only guild members who contribute to the guild during the Exhibition Tournament season can receive rewards.

They will be reset when the tournament season ends. 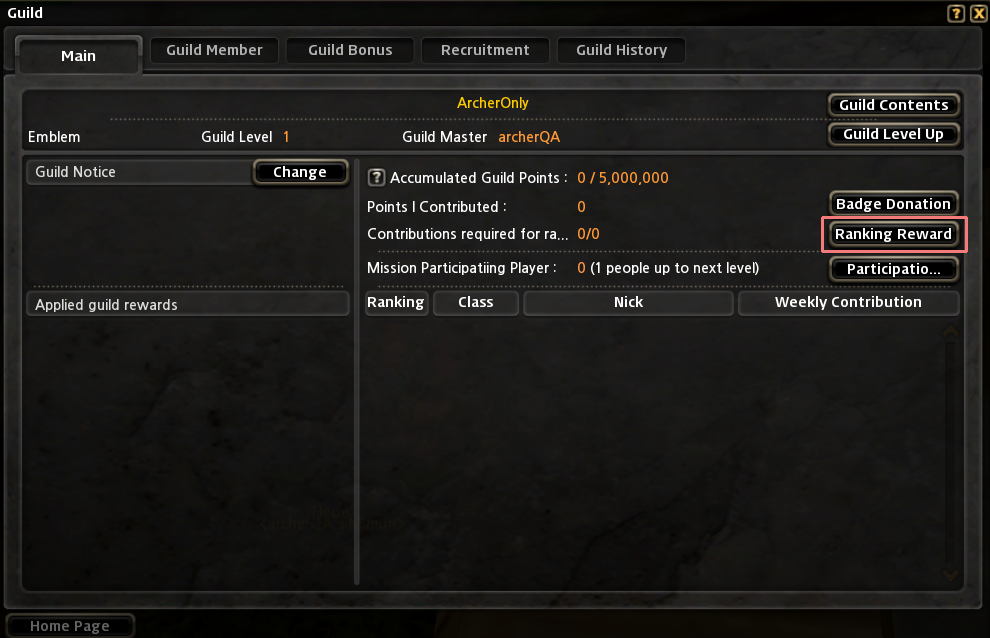 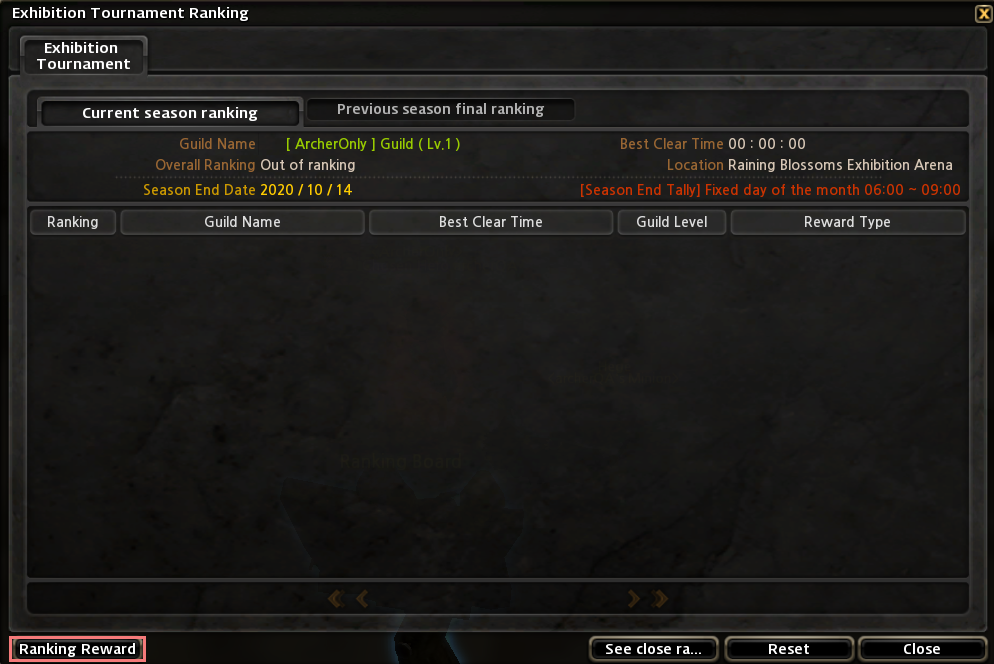 The criteria for automatic selection of a difficulty level upon reconnecting to the game has been changed as below.

※ After the patch is applied, the initial difficulty selected for all players will be [Easy].

As a mode where players put their pure PvP skills to the test, the matching process is very important for Ladder Rank Battles.

Lately, a lot of players have abused the system by repeatedly leaving before the battle begins after successful matching in order to increase the chances of being matched with a desired opponent.

This has negatively impacted players who enjoy ladder matches in several ways, including having their matching or battles canceled while on standby or after moving to a map.

As a result, we have modified the system so that a penalty is applied to an entire account when a player leaves at any point from the moment matching is successful and the countdown is displayed to the end of the battle.

When a player leaves during battle, a loss will be tallied and their points will be reduced the same amount as before.

All characters in an account will be banned from ladder matching if a player leaves at any point from the point of successful matching when the countdown begins to the end of the battle.

▶ With the Hero’s Battlefield closing, the entry ticket item [Deep Abyss Dimension Box Key] has been changed to a collection item.

▶ [Deep Abyss Dimension Box Keys] can no longer be acquired from Adventure Boxes.

▶ The Hero’s Battlefield ranking board is expected to be closed in November.

- The Gold Goblin who appeared in some stages will no longer appear.

▶ The small amount of gold that could be acquired for defeating normal stage monsters can no longer be obtained.

▶ Changed the guild mission collection item description tool tip color to be the same color as for other currency items.

▶ Added a Precious Item tab to the Common Goods section in the Blacksmith’s Craft Item menu.

▶ Added a notification that the item cannot be worn in duplicate to Fierce Battle Heraldry item descriptions.

▶ The Slayer Mode Shop can no longer be used by speaking with Temple Knight Aaron of the Temple Knights Training Area. 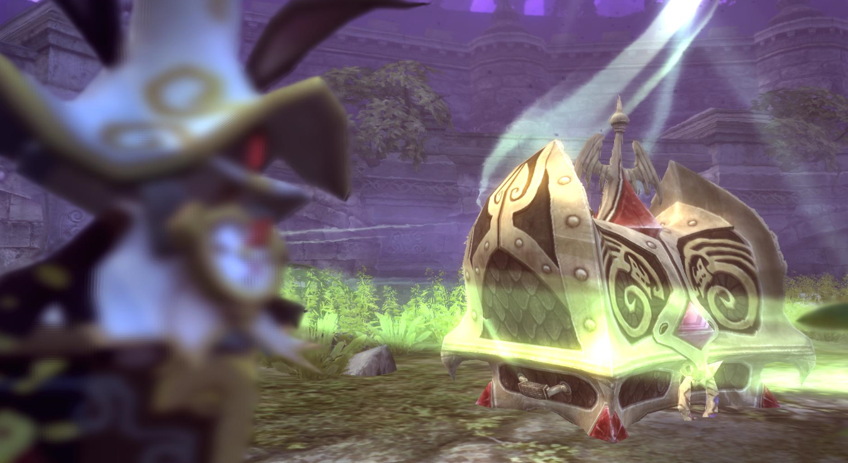 • Obtained Location: Can be purchased at the [Dimension Rabbit]-[Everyone’s Banquet Shop] in the Temple Knight Training Ground

• Only 1 can be purchased per character daily. Entry tickets have a 1-day usage period. 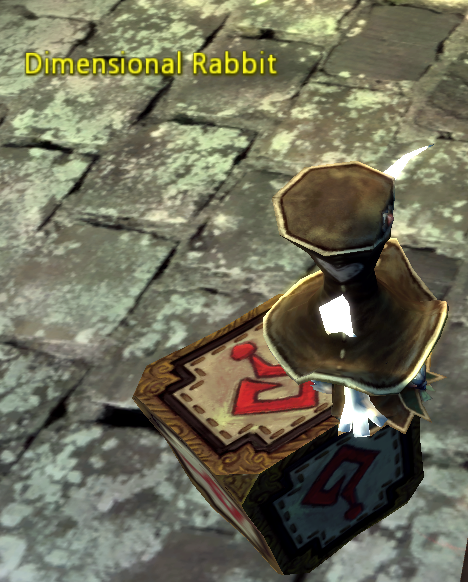 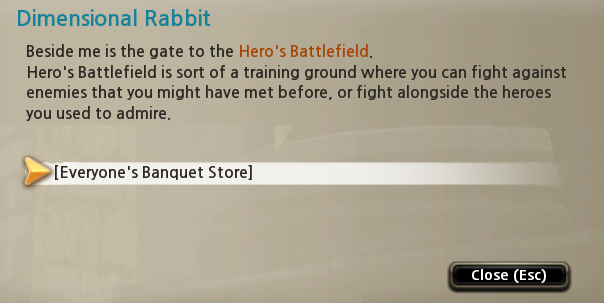 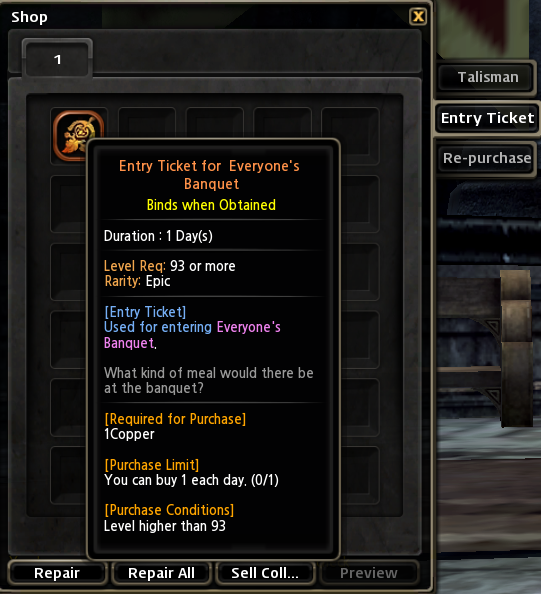 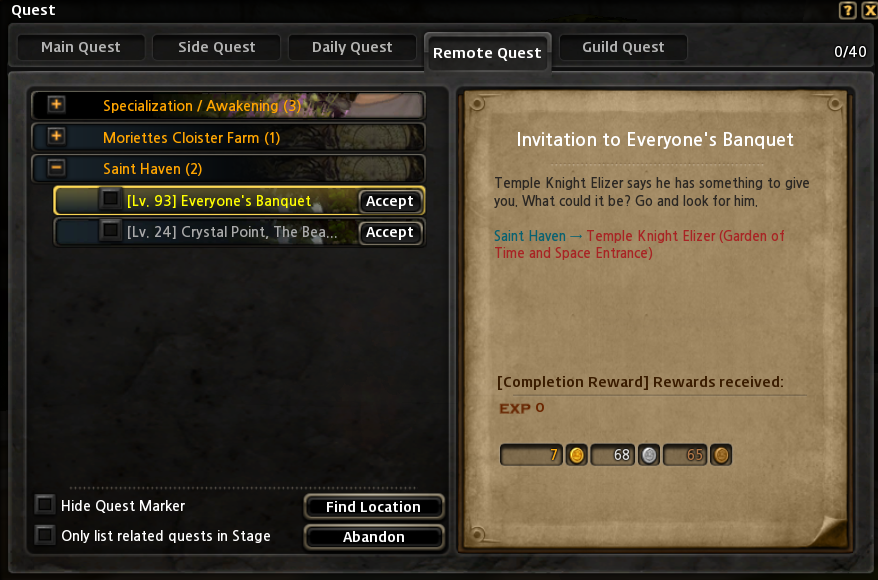 ※ Press the shortcut key ‘U’ to open the Quest window, then click the ‘Remote Quest’ tab to receive.

※ This cannot be received by characters who have already cleared the existing Everyone's Banquet quest.

• Challenge to the highest floor to get better rewards.

• The stage ends if all players are annihilated.

• Entering a normal stage type brings you randomly to one of two random stages.

- A [Dimensional Fragment] can be acquired from treasure chests appearing upon clearing 4F, 7F, 11F, and 12F in Everyone's Banquet.

Additional fragments can also be acquired, but at a low rate.

- A Rock of Darkness or Golden Goblin Coin can be acquired in the reward chest of the final floor (12F), but at a very low rate. 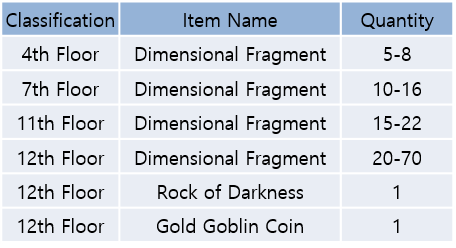 - There you can purchase [Ancient Element Enhancement Talismans] that increase All Attribute ATK.

- They initially come with a 0.5% All Attribute ATK stat value that can be developed to a maximum of 6.5%.

- Converters are consumed after a single use.

- The type of Converter that can be used depends on the current stat value of an [Ancient Element Enhancement Talisman]. Development proceeds as shown in the table below.

▶ [EVENT] Storm of Time and Space has changed. 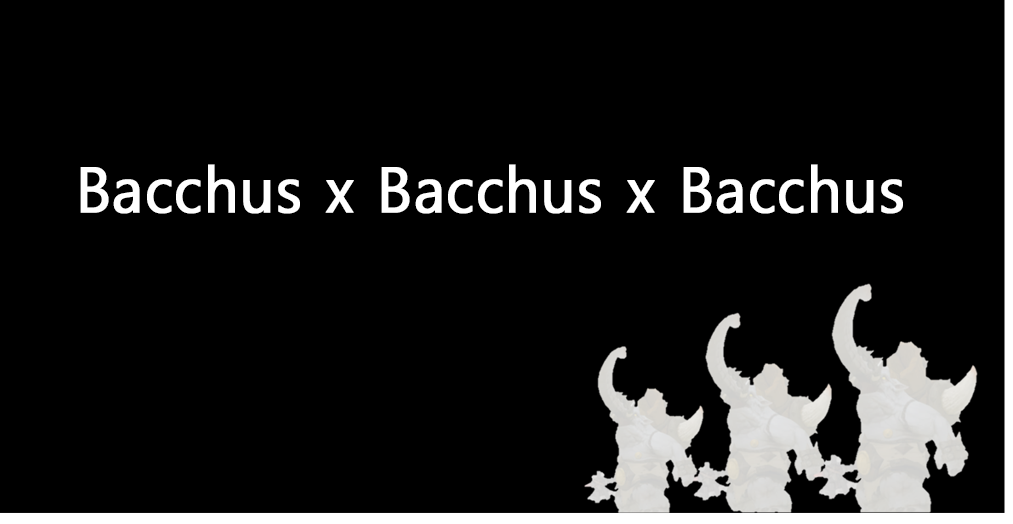 • Teach the 3 Bacchus Brothers a lesson.

• Meteors are the best tool for giving them a scolding.

• Rumor has it receiving a lot of compliments whips up a strong gale. 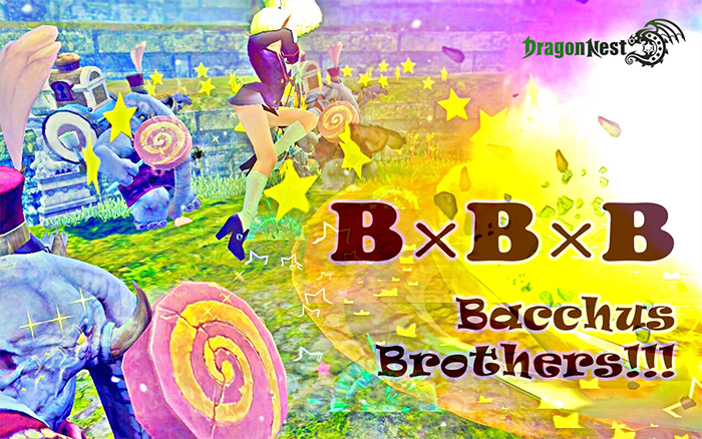 Storm of Time and Space – Changes 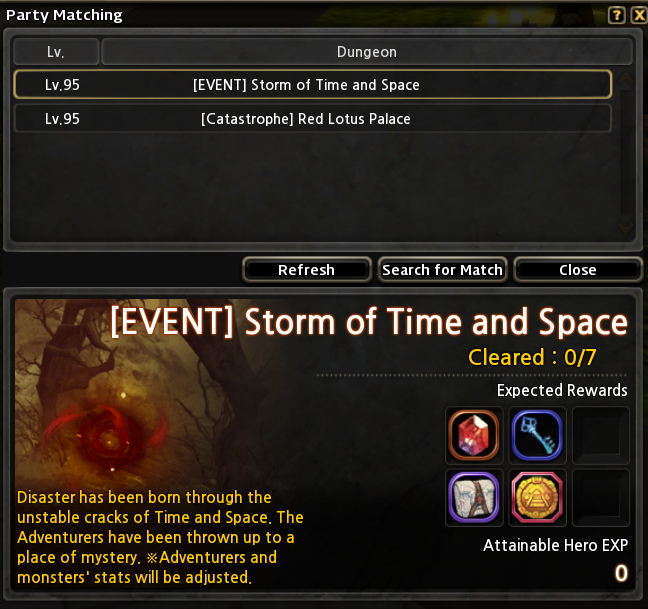 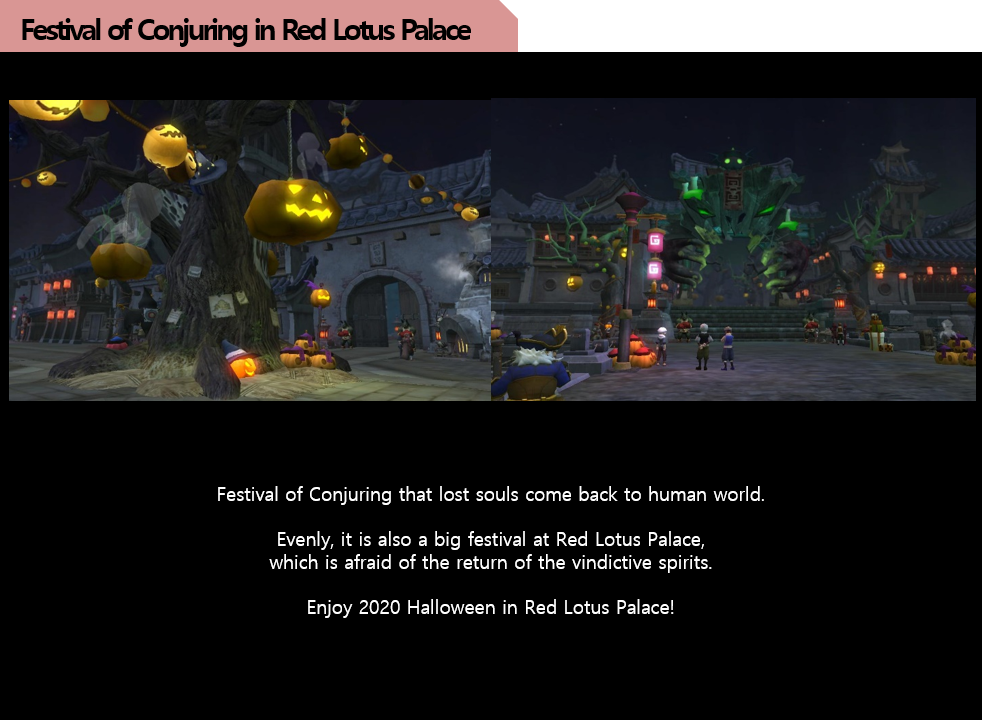 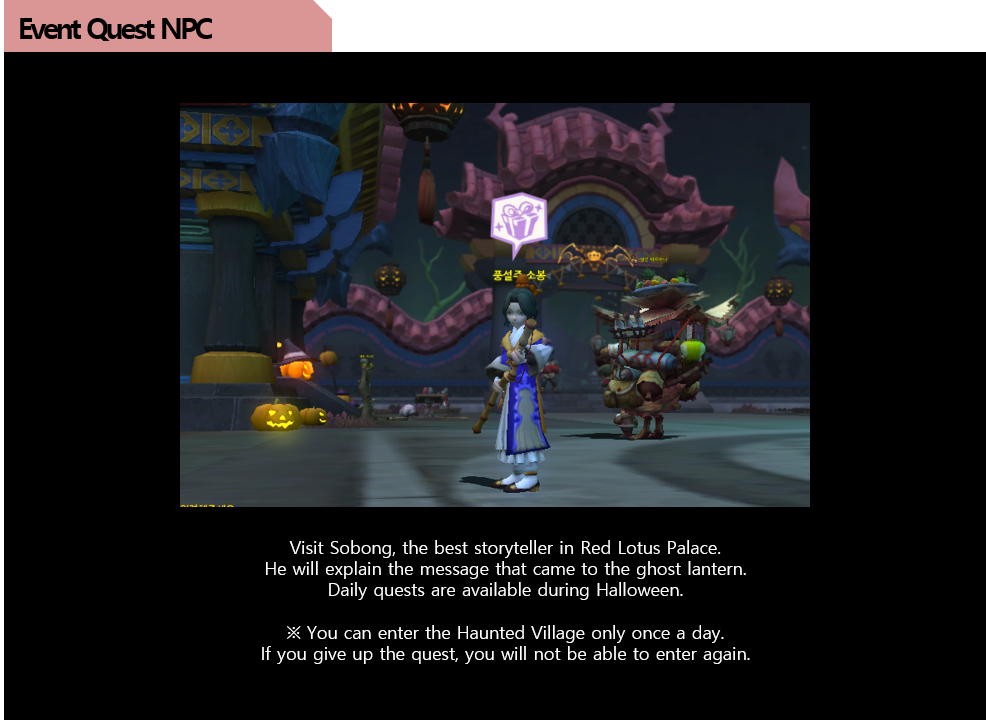 - Items are available to exchange at NPC Storyteller Sobong in Red Lotus Palace and Kathy in Saint Haven. 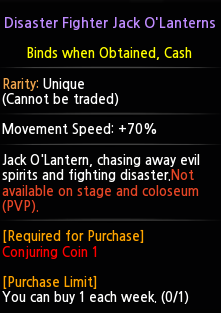 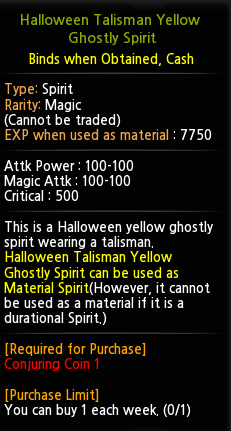 • Players will get one 'Goddess Coin' as an attendance reward with each daily login from October maintenance until the next update. 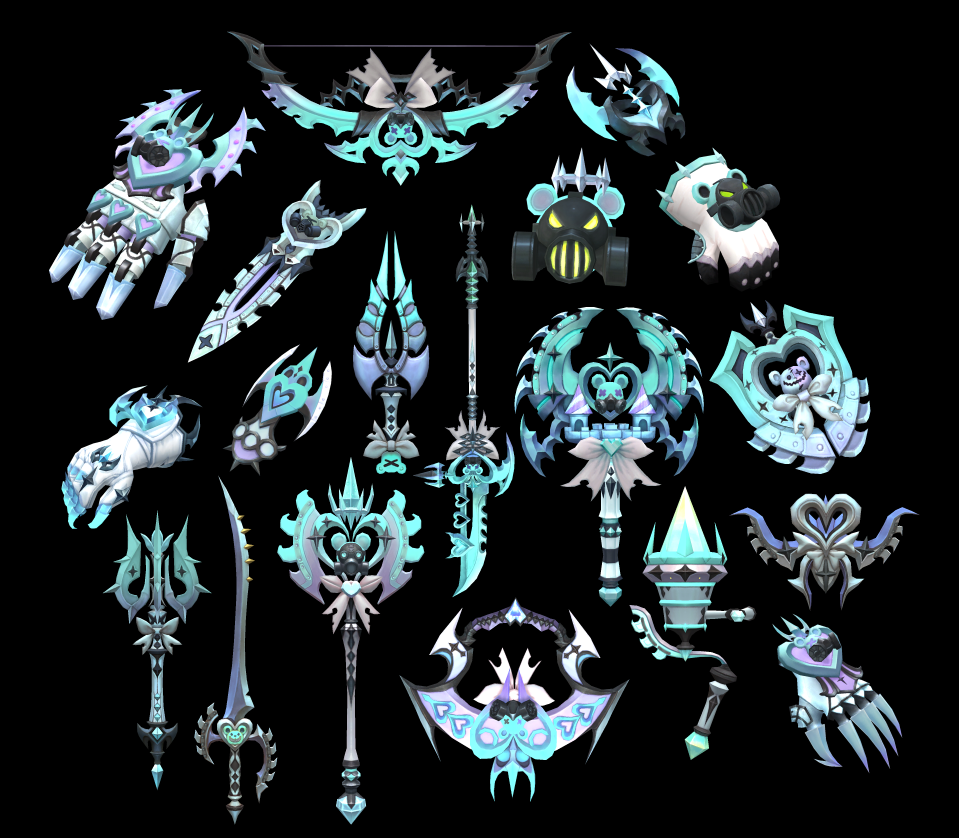 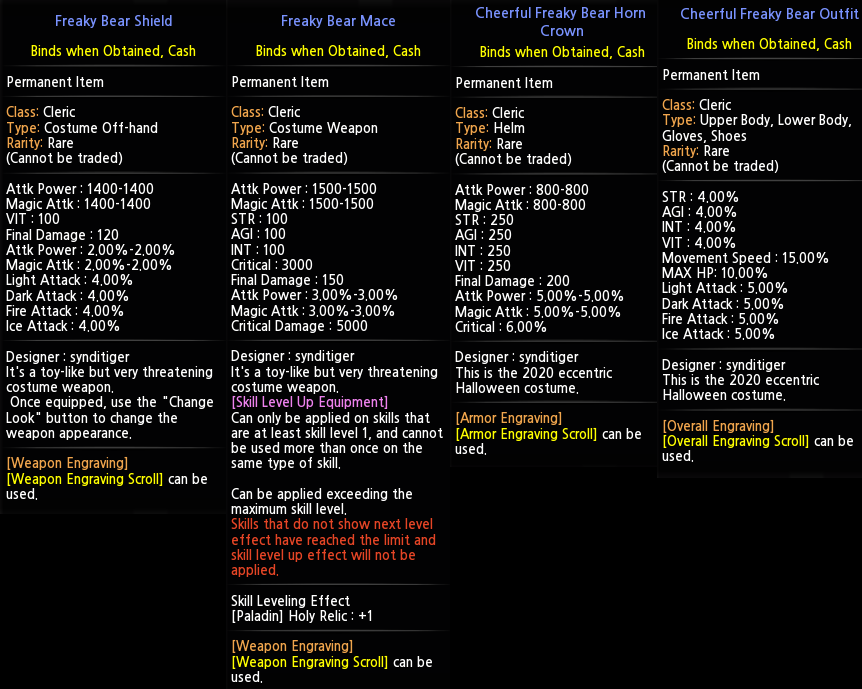 • Raincoat Costume will be removed from October target. 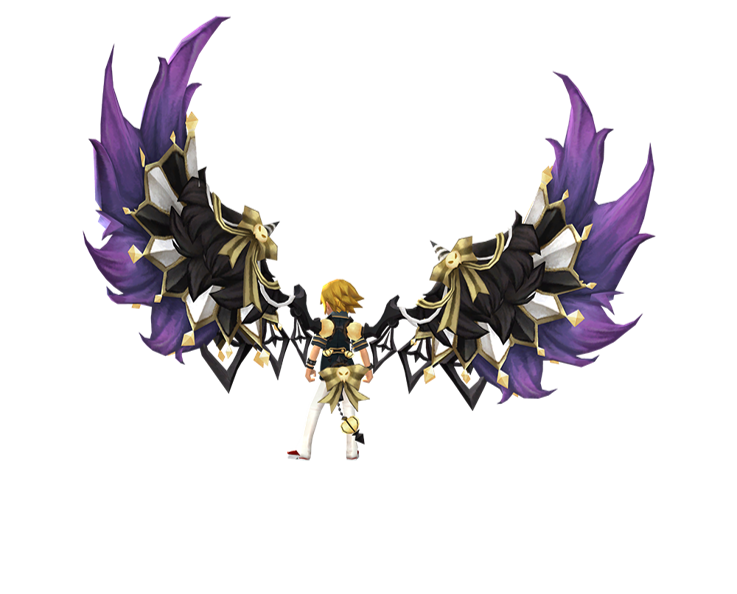 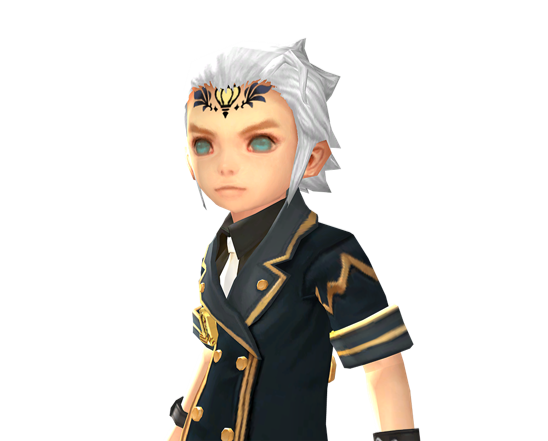 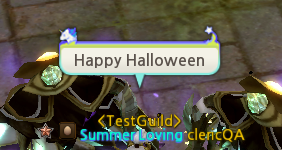 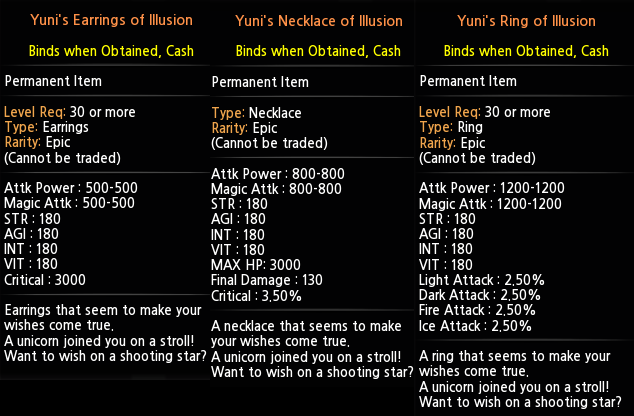 • Raspberry Lace Trimming Wings/Tail/Decal will be removed from Special Lagendia Pandora Box at October target. It cannot be exchanged at Pandora Point Shop from October target.

• Summery Necklace/Earrings/Ring will be removed from Special Lagendia Pandora Box at October target. It cannot be exchanged at Pandora Point Shop from October target.

• Pandora Grown Spirit Box is available to purchase with EYET only. 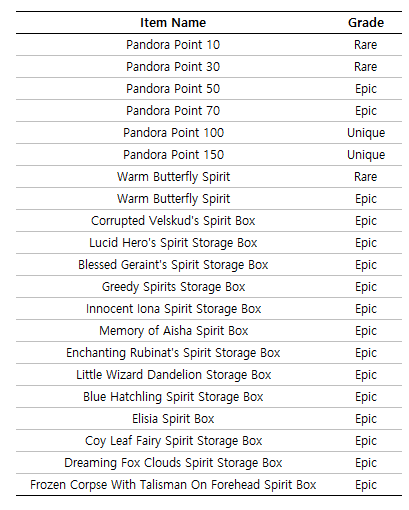 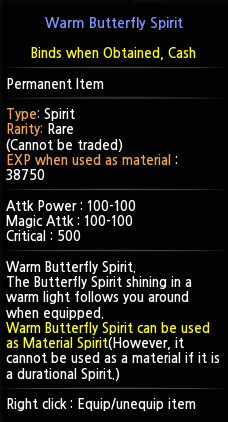 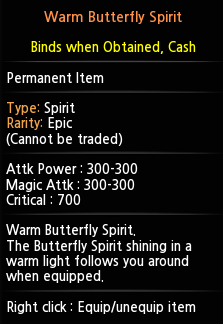